Home  |  1st XV back to winning ways against Gower College.

1st XV back to winning ways against Gower College. 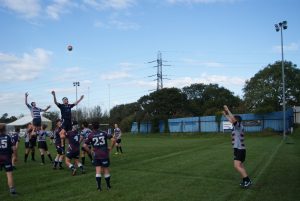 Jason Stagg challenges for a lineout.

Gowerton hosted Gower College at Gowerton RFC  in their Aquazone sponsored Ospreys league game and were looking to bounce back from last week’s heavy defeat at Neath College. They did so and in the process produced an impressive display of handling and offloading in a game which saw the visitors score four tries themselves.

With conditions ideal for open rugby, it was the hosts who settled first and they opened the scoring in the 2nd minute when College were penalised for not releasing in their 22. The penalty was tapped quickly and centre Kieran Charles created the space for hooker and man of the match Ben Brown to power over. 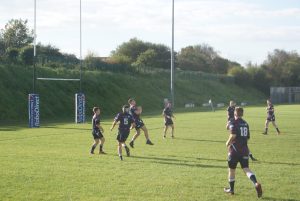 Gowerton stretched the lead to 15 points with 10 points from fly half Dexter Ryde. First strong carries by lock Ryan Stagg and captain Max Harris established a position on the visitors 22, College appeared to have the numbers to defend but Ryde’s ‘eye for the gap’ saw him slice through to score at the posts, he converted and added a penalty in the 20th minute after a long run out of defence by centre Charles, established a position deep in the visitors’ 22.

However, College were more than competitive, and were back in contention with two converted tries before the break from full back Rhys Gear. The first came when fly half Brandon Owens kicked cleverly into space behind the hosts’ backs for Gear to gather and sprint clear. Then with the last play of the half a long kick out of defence by Owens bounced awkwardly and full back Gear was on hand to profit and sprinted clear to score. Gear added both conversions and Gowerton’s lead was 20-14 at the break. 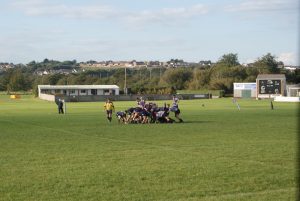 College, buoyed by their success at the end of the first half, pressed for another score with flankers Iestyn Roberts and Max Arnold both to the fore, but in the 42nd minute it was the hosts who extended their lead. Fly half Ryde was tackled just short, No.8 Harris picked up and dived over. Three minutes later an elusive run by full back Max Treharne took Gowerton deep into the College 22. The visitors were penalised and strong carrying hooker Brown tapped quickly and powered over. Ryde added the extras to both scores.

The visitors continued to give as good as they received and when flanker Arnold brushed aside several tacklers, full back Gear was on his shoulder to complete his hat-trick and again convert.

Flanker Bright re-established the hosts’ lead when he sprinted clear from a scrum on the 22. Ryde converted, but College had the final say when the impressive Gear scored for a fourth time. 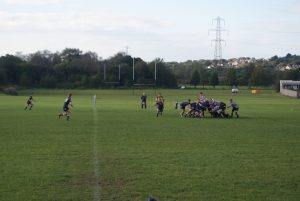 Iwan Jones fires out a pass.

A hat trick from Andrew Clifford was the highlight for Gowerton.