Home  |  A tough week but much credit for the rugby squads.

A tough week but much credit for the rugby squads.

After last week’s clean sweep of victories, it was a contrasting affair this week with Gowerton losing all matches. However, all their games were keenly contested, an excellent advert for schoolboy rugby and in the balance until the final whistle.

Olchfa travelled to Gowerton in the Ospreys West schools and colleges premier league.

The reverse fixture had been a tight and low scoring affair which Olchfa had won 11-5. This game was equally competitive, but with the sun on their backs and conditions ideal for running rugby, both sides looked to attack at every opportunity sharing ten tries and only being separated by a single point at full time.

The narrow margin of victory failed to tell the story of a game that was very much a ‘tale of two halves’.

The visitors dominated the first period with the hosts unable to handle the power and physicality of flanker and captain Jaxon James and No.8 Oscar Muxworthy and with outside half Sam Powell controlling the game intelligently they built an imposing half time lead.

Olchfa kicked off and when the hosts were penalised for not releasing they kicked for the corner. From the lineout they won clean ball, and after a couple of strong carries by the forwards were rewarded when flanker James scored.

The hosts’ attacks were well orchestrated by fly half Charlie Smith and in the 9th minute, his line break was supported by centre Cameron Clayfield who carried the ball deep into Olchfa’s 22. His offload was intercepted by a defender allowing the visitors to kick clear, Gowerton’s full back Alex Hughes counter attacked and fed wing Joe Legg whose touchline run was only denied by a last gasp tackle that ended with a penalty to the visitors for not releasing.

The ensuing lineout saw the Olchfa forwards carry the ball strongly before fly half Powell kicked over the hosts’ defence and wing Lloyd Hughes won the race to dot down over the try line.
Gowerton were still intent on attacking, and when full back Hughes decided to run from his 22 with support from wing Tom Richards, centre Clayfield was again on hand to receive his pass and race clear into the Olchfa 22, but again his offload only found an Olchfa defender. The end to end nature of the game saw centre Myles Mathews counter attack and after several phases, No.8 Muxworthy powered over for the visitors’ third try.

Confidence boosted by this score Olchfa continued to attack, and initially were only denied by good defensive work by the hosts’ forwards; Jacob Purcell, Reid Davies and Rhys Flower. It seemed inevitable that Olchfa would increase their lead and when they were awarded a penalty 5m out, a quick tap penalty saw flanker James cross for their 4th try. With outside half Powell adding 3 conversions and a penalty the lead was 29-0 at the break and it looked like the visitors would return home with a comfortable victory.

Gowerton knew they would have to work hard to reduce the deficit in the 2nd period and the task was made even harder when Olchfa moved the ball wide and centre Mathews scored in the corner. The introduction of centre James Northey at half time seemed to give the hosts a lift, and when he made a break off an attacking scrum, centre Clayfield was on hand to score and full back Hughes’s conversion reduced the deficit.
Gowerton realised they had to throw ‘caution to the wind’ and when they were awarded a penalty, scrum half Matthew Davies tapped it quickly and fed hard working centre Tom Barrington who crashed over. Hughes converted.

Gowerton were now on the front foot, and good defensive work by prop Mabon Kaniewski and flankers Sam Terry and Garin Thomas allowed centre Northey to gather a loose ball and feed Clayfield who burst through a gap in the defence to score his 2nd try of the game. Hughes again added the extras and the deficit was 13 points.

Olchfa’s defence was tiring and with the hosts continuing to press they were rewarded with a number of penalties which continued to be taken quickly and eventually the quick feet and pace off the mark of Clayfield saw him complete his hat trick.

Then with five minutes left on the watch the tireless work of flanker and man of the match Tom Davies was rewarded with a try that Hughes again converted.

Gowerton pressed for a winning score keeping the ball alive as if they were playing sevens rugby, but a knock on brought the final whistle and the end to an excellent game of rugby from which all involved took great credit.

Gowerton travelled to Bishopston for games at year 7 and year 10 level and in two more excellent games of rugby it was the hosts who emerged on top in both games.

A spirited second half performance from Gowerton was not quite enough to overcome a powerful Bishopston side. 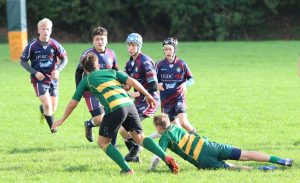 Gowerton outside half Paul Packham takes on two Bishopston defenders with in support, left to right; Alfie Woodcock, Henry Aiono and Zac Cook.

Bishopston were strong at forward with No.8 Oscar Dunne, flanker Evan Richards and prop Leo Woolacott all impressing. They were on the front foot quickly, winning several of the visitors’ set pieces and opened up a 12 – 0 lead inside the first 10 minutes with tries by prop Woollacott who used his strength to drive over from short range and No.8 Dunne who intercepted a loose pass and sprinted clear for a try that fly half Will Jones converted. 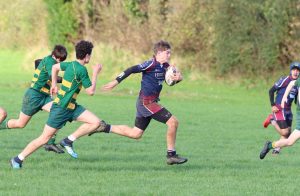 Gowerton were struggling to cope with the hosts’ powerful forwards and but for the tireless work of flanker and man of the match Ben Cort at the breakdown, Bishopston would have been further ahead.
Things needed to change and the visitors changed their game plan, moving the ball away from the contact area as quickly as possible. The change paid dividends, and they began to achieve a foothold in the game with centres Will Thomas and Joe Hawkins-Cole both running strongly and proving difficult to bring down. 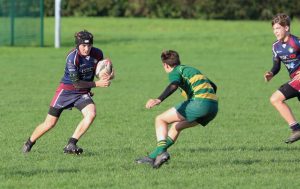 Centre Will Thomas who ran strongly takes on an opponent.

Gowerton reduced the deficit, when a loose kick from the home side was gathered by full back Taylor John, he countered from his own 22 and set off on an elusive run that saw him evading numerous defenders before offloading to wing Vikran Sanghera who scored. Outside half Paul Packham added the conversion. 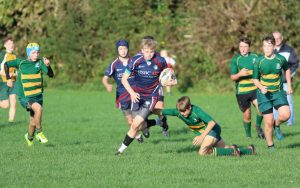 Gowerton’s full back Taylor John on the attack.

However, the hosts’ forward power was evident again straight from the restart. They re-gathered their kick off and after a number of powerful drives, prop Woollacott scored for a second time. Fly half Jones added the extras and at the break Bishopston held a 19-7 advantage. 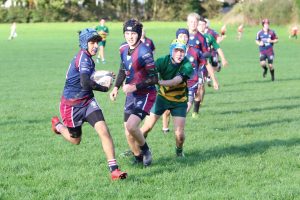 Vikran Sanghera, who grabbed a brace of tries, sprints clear.

Half time saw Gowerton making a number of changes and with the substitutions working positively they started the half brightly with prop Mikey Black proving particularly influential in the scrums and rucks. A Bishopston scrum on half way was won against the head and quickly moved to impressive centre Hawkins-Cole, he broke 3 tackles before offloading to wing Sanghera who crossed for a second time to make the score 19 – 12. 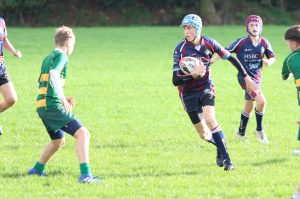 Paul Packham looks to beat an opponent-get that ball in two hands Paul!!

With 10 minutes left, the hosts stretched their lead with a try by fly half Jones that he converted himself.
With five minutes left on the watch, another counter attack from the visitors’ ended with wing Caradog Kaniewski crossing in the corner. Full back Taylor John’s conversion left the result very much in the balance, but the hosts’ resolve was unshakeable and at the final whistle they held the advantage the power of their forwards first half performance deserved. 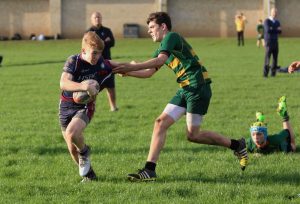 The year 7 game between the two schools was again keenly contested with both sides keen to keep the ball in hand at every opportunity. 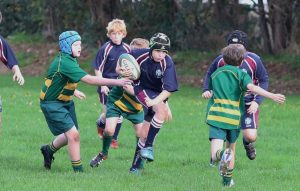 No.8 James Wells on the charge. 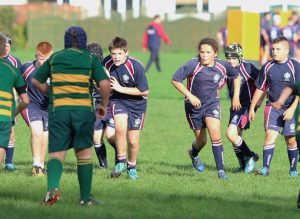 However, it wasn’t enough, and the hosts came out on top with five tries of their own. 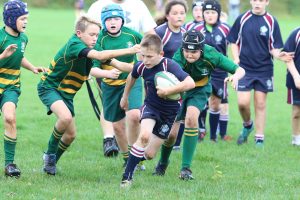 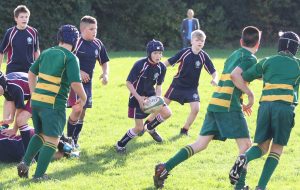 Ben Hughes looks for a gap with Harvey Marshall inside and Conor Colwill-Upson outside. 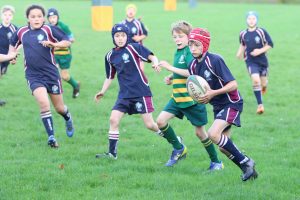 Excellent technique from Reuben De Vall with the ball in two hands. 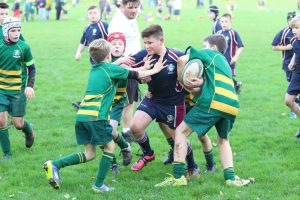 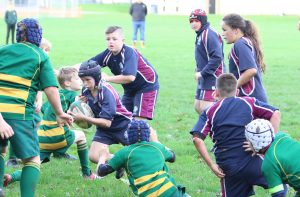 Jacob Garlick bursts into a gap.