Year 11 embody heart and effort but to no avail. 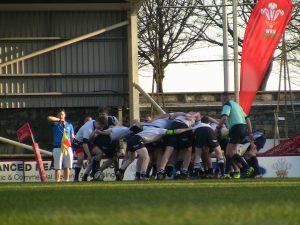 Iwan Jones waits at the base of a scrum.

Gowerton’s year 11 team travelled to St. Helens’ for the final of the newly inaugurated year 11 plate competition. Having been well beaten by opponents Bryntawe in the qualifying rounds of the Welsh cup back in November, they realised they faced a tough challenge. However, it was a challenge they had prepared for thoroughly and going into the game they were confident they could turn the tables on their opponents.

A colour clash meant that Gowerton reversed their shirts to play in white and at kick off they had the advantage of a slight breeze at their backs, however, it was the Welsh school that made the early running with their back row strong in the contact area and their inside backs running powerfully and they were first to threaten when Gowerton’s defensive line was breached in midfield. It took a fantastic one on one tackle by full back Jacob Williams to deny them the opening score. Bryntawe’s early pressure was rewarded in the 9th minute when they sliced through a gap to score a try that was converted. 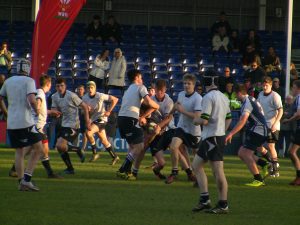 With quick ball, Gowerton’s backs always carried a threat with the intelligent angles of running of centres James Northey and Danny Thomas creating opportunities and they reduced the deficit in the 14th minute when a snipe down the blindside of a scrum by scrum half Iwan Jones was well supported by full back Williams who ran hard at the cover, he was tackled just short, but wing Tom Barrington was on his shoulder to take a short pass and dive over.

Gowerton were reduced to 14 men when a yellow card was issued for not rolling away and Bryntawe took full toll of their numerical advantage crossing for two unconverted tries in the ten minute spell that followed. With confidence boosted by these scores they added another try on the stroke of half time. All three tries were converted and at the break, their lead was a convincing 28-5. Bryntawe increased their advantage in the early stages of the second half and at 33-5 it looked like a heavy defeat was in the offing. However this group had been playing together as a team for five years and one thing that could never be doubted about them is their spirit and character. This was to be their last game together and they were determined that they were not going to finish with a whimper. 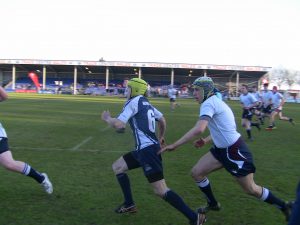 James Northey gives chase-Hey James, don’t tackle him, he hasn’t got the ball!

As the heavier Bryntawe forwards began to tire, they took the game to them with renewed vigour. The back row of Lewis Grove, Leon Bevan and Will Griffiths began to get on top at the breakdown and with a supply of quicker ball scrum half and captain Iwan Jones urged his side forward and with the impressive probing of the outside half Cameron Clayfield beginning to create space the game was turned on its head and Gowerton dominated the final quarter. They reduced the deficit when good work by flanker Bevan resulted in him being tackled just short but lock Ben Grunhut was on hand to collect the loose ball and drive over. 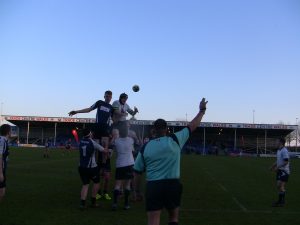 Minutes later, lock James Hick showed impressive skills to dummy his way through the defence, man of the match hooker Tom McCann was in support and after the ball went through a number of pairs of hands captain Jones crossed for a try he converted himself. 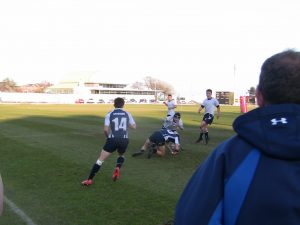 Leon Bevan prepares to contest the ball on the floor.

A comeback looked well and truly on when hooker McCann crossed but, push as they might for another score, Bryntawe held out to lift the trophy.