Year 7 double up at Bryntawe.

Gowerton year 7 travelled to Bryntawe to play two games and returned with two victories in games that were both played in an excellent spirit. 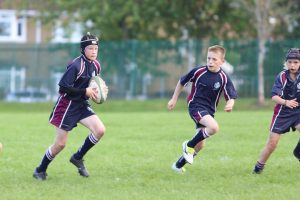 Great technique from Ethan Davies-ball in two hands with support from Iwan Pearce-Morgan and Jacob Garlick.

The visitors’ forwards were on top from the kick off with the front row of Josh Anderson, Ethan Wood and Harvey Marshall all carrying strongly and with scrum half Iwan Pearce-Morgan snapping at their heels and distributing intelligently they dominated the first half scoring seven unanswered tries. 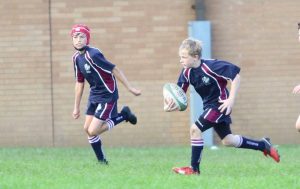 Fly half Cameron Bevan has full back Reuben De Vall on his shoulder.

In the 3rd minute, centre Ethan Davies broke clear on halfway and had the pace to outstrip the cover and open the scoring. No.8 Tyler Davies was too the fore in the next five minutes crossing twice. The first came after a good carry by lock Richard Davies took him up to the hosts 22, when he was tackled, scrum half Pearce-Morgan’s well delivered short ball and No.8 Davies’s excellent angle allowed him to break the defensive line and score a try converted by full back Reuben de Vall. Davies’s second try was a result of his pace and power that saw him burst clear on halfway. 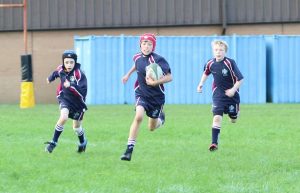 Bryntawe now enjoyed their best spell of the game with hooker Evan Harris carrying strongly and scrum half Ellis Davies a threat around the fringes. However, Gowerton’s robust defence with props Harvey Marshall and Josh Anderson prominent refused to be broken and they relieved the pressure when a break by fly half Cameron Bevan allowed him to free centre Drew Dodd and his impressive acceleration took him clear for a try that scrum half Pearce-Morgan converted. 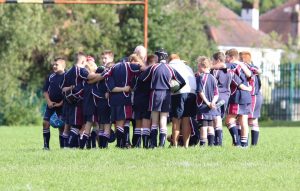 The try boosted the visitors’ confidence and they added three further scores before the interval. First, fly half Bevan crossed after good work by scrum half Jacob Garlick, then Pearce-Morgan, now playing on the wing sliced through a gap in midfield and then with the last play of the half lock James Wells tip-toed down the touchline to score in the corner and at half time Gowerton’s lead was 34-0.
In the second period, the hosts showed great resilience, with scrum half Davies and hooker Harris continuing to impress, but Gowerton’s defence continued to thwart their attacks and it was the visitors who completed the scoring when elusive full back Reuben DeVall avoided two tackles on half way and then showed his pace to sprint clear for a try that centre Ethan Davies converted.

Gowerton’s year 7 maroons were involved in a spectacular try fest which saw the try line crossed on ten occasions and it was the visitors who ended up coming out on top claiming six of those scores.
The visitors opened the scoring in the 6th minute when a powerful 60 metre charge by prop Tyler Murphy took him deep into Bryntawe’s ’22 and when he was tackled 10 metres from the line fly half Jac Lewis-Colwill was on hand to slice through the cover for a try he added the extras to.
Bryntawe replied immediately when pacey centre Rio Creamer, playing his first game of rugby, shrugged off a number of would be tacklers in his own half before sprinting clear for his side’s first try.
Gowerton re-established their seven point lead when scrum half Ben Hughes darted over from close range and when impressive lock Jorja Aiono scored a brace of tries in the final 10 minutes of the half, one of which Lewis-Colville converted the visitors had stretched their advantage to 24-5 at the break.
In the second period, Bryntawe reduced the deficit when centre Harri Mills jinked his way over before Gowerton stretched their lead again with tries from lock Richard Davies and flanker Noah Tregonning.
Bryntawe finished strongly with full back Brandon Walker and wing Mckenzie Downey both looking dangerous and they had the final say with tries in the last ten minutes by wing Logan Jenkins and centre Harri Mills.

Gowerton’s year 8 and 9 teams travelled to Morriston to continue their Welsh schools’ cup games and returned with two victories against game opponents.

In the year 8 game Gowerton bounced back after losing to Cwmtawe crossing their opponents line six times with lock Oscar Harvard (2), scrum half Jayden Grey, full back Rhys Craven and wings Carson Rees and Finn Sutton all scoring. No.8 Harvey Thomas added a conversion.
Morriston replied with a brace of tries by wing Cameron McGrowther, fly half Leon Arnold kicked one conversion.

Gowerton also came out on top in the year 9 game. They had been defeated in the final minute by Cwmtawe in the first round of matches but with No.8 Andrew Clifford a powerful presence both in attack and defence and with captain and fly half Jake Riordan controlling play intelligently, with his kicking game particularly impressive, they were able to come out on top crossing for six tries.
Wing Madoc Jenkins ran elusively to score two tries, No.8 Clifford also grabbed a brace, prop Marley Bushell carried strongly and flanker Jamie Terry was rock solid in defence.