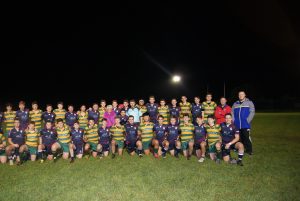 This was the sixth occasion a game had been held to celebrate the life and values of the much respected former Head of PE. Christ College had been involved in the previous three games winning them all.

This time the hosts were able to turn the tables on their visitors scoring six tries to secure a well deserved 34-13 win that was founded on the power and teamwork of the pack with Welsh Schools international No.8 Will Griffiths a towering presence in both the tight and the loose.

Others to impress at forward were props Ben Brown and captain Ryan Hughes who carried strongly and dominated the scrums, lock Jason Stagg and flanker Jack Soproniuk who, as always, worked tirelessly throughout. 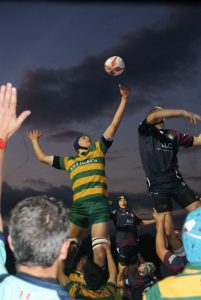 Behind the forwards, scrum half Iwan Jones was a constant threat around the fringes and gave his half back partner Dexter Ryde an exemplary service that enabled him to control the game in a way that must have impressed the watching Dan Biggar and Sam Davies.

Amongst the outside backs, centre James Northey was solid in defence and distributed well allowing full back Tom Ham to look dangerous every time he was in possession. 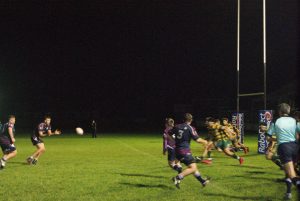 Will Griffiths has his eye on the ball.

Ham was instrumental in the first score, when his elusive run ended in him being tackled just short of the visitors’ line. When College were penalised, the penalty was kicked to touch and from the resulting lineout hooker Aled Simons drove over.

Christ College opened their account two minutes later when fly half Will Holloway kicked a penalty from 30 metres after the hosts were penalised for offside.

Gowerton stretched their lead in the 21st minute when full back Ham scored his first try after fine approach work by prop Brown. Five minutes later, they doubled their advantage when scrum half Jones made a break that took him to the try line. When College were penalised at the breakdown, it was tapped quickly and the alert Ham was able to drive over for his second score, wing Elliott Rees converted.

However, it was the visitors who had the final say of the half. When Gowerton were penalised, College kicked to the corner and after a well orchestrated catch and drive No.8 Jonathan Howells scored to leave the hosts with a 17-8 lead at the break. 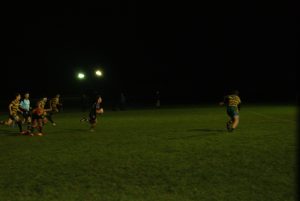 Tom Ham leaves defenders in his wake on the way to his third try.

Buoyed by this score, the visitors started the second half on the front foot and crossed for a second try when fly half and captain Holloway brushed aside a tackler on the 22 and sprinted clear to score.

Gowerton were now on the back foot and in need of inspiration and found it in the form of full back Ham who gathered a misdirected kick on half way and set off on a mazy run that took him past several would be tacklers before touching down beneath the posts. Wing Rees added the extras.

The hosts were now on the front foot and with man of the match Ryde orchestrating play effectively from fly half they added two further tries both of which came from scrums on the College 5 metre line. From the first No.8 Griffiths picked up and powered over and then from the second he picked up and fed replacement scrum half Jacob Williams who completed the scoring earning the hosts their first victory over the visitors.

A collection at the game raised £375 for Macmillan.