Gowerton cheer Wales on to success.

The Autumn internationals saw 90 pupils and staff travelling to Cardiff from Gowerton School on the annual pilgrimage to the Millennium Stadium to support the national side in their game against Tonga.

It was the 11th occasion the school had made the trip since their inaugural visit in 2005 to watch Wales take on Fiji. 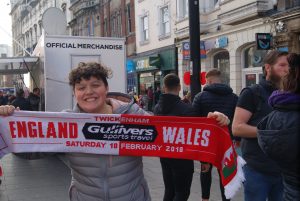 Aliyah Guy was looking forward to watching England against Wales!!

With the game again taking place on Saturday afternoon the party were able to spend an hour in Cardiff before the game to ‘soak up the atmosphere’ and one of their highlights was waiting in Westgate Street to welcome the team buses as they arrived, something which certainly added to the day. 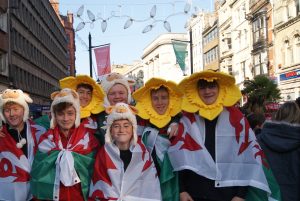 Soaking up the atmosphere in Cardiff before the game.

The group were seated in the stadium an hour before kick off and with seats in the lower tier they were able to watch the Tongan team warming up at close hand. Mr Thomas, Mr Lewis and Mr Roberts gave a passionate rendition of ‘Delilah’.

The anthems and Tonga’s ‘Haka’ then saw the pre-match atmosphere building to a crescendo and with Wales scoring ten tries we were rewarded with a Welsh victory.

Former pupils Liam Williams and Dan Biggar both played really well.  Liam on the occasion of his 50th cap scored two tries and with Daniel contributing 19 points including a try of his own he was awarded the ‘man of the match’ meaning the group travelled home in good spirits, arriving back in Park Road by just after 6.30pm.

For many of the pupils it was their first visit to the Millennium Stadium and the first time they had watched Wales ‘live’ and having been rewarded by a great performance from the hosts their appetite was certainly ‘whetted’ for their next visit. 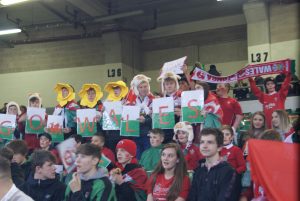 Waiting for kick off inside the Stadium. 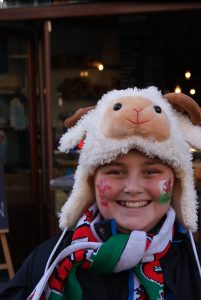 Year 7 pupil Jamie Tooze is excited at the prospect of the game.