Home  |  Gowerton come out on top against Aussie visitors

Gowerton come out on top against Aussie visitors 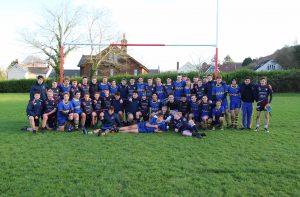 Gowerton’s under 17s hosted St Aloysius’ Catholic College from Sydney, Australia during the Welsh leg of their tour of the UK and Ireland.
They arrived having had mixed fortunes beating Clongowes College, Dublin 40-0 and losing 24-7 to their sister College in Glasgow. Their game against St. Mary’s College in Derby had fallen foul of the poor recent weather. That poor weather continued during their stay in Wales but with Penclawdd RFC allowing the use of ‘the Rec’ for the game, the excellent drainage of the pitch meant that underfoot conditions were perfect. The strong wind blowing up the estuary made passing difficult but gave the team playing with it a significant advantage.
The visitors kicked off and with the breeze at their backs they dominated the first quarter. Their front row of Leo Maher, Oskar Ott and Liam Wells were on top in the scrums while No.8 Harrison Hill carried strongly.
The hosts were forced to defend in their 22 for virtually all of the first 20 minutes and they were indebted to the defensive work of their back row of captain Sam Terry, Ben Cort and No.8 Caradog Kaniewski. 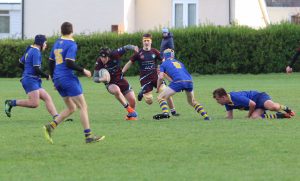 The visitors looked certain to open the scoring on several occasions only to denied by excellent turnovers on their own goal line by Cort and Kaniewski and then following a well-judged kick ahead by the tourists’ centre and captain Charlie Bruton it took the skilful work of full back Ben Lewis to gather, beat the onrushing attackers and then calmly clear his line.
When Gowerton were in possession half backs Sam Wells and Paul Packham intelligently opted to use their runners close to the breakdown and hooker Jacob Purcell, props Henry Aiono and Peter Legg-Davies and lock Alfie Woodcock all carried strongly and regularly got their side beyond the gain line.
In the 25th minute it was the hosts who, against the run of play, took the lead with their first meaningful attack. A strong run by wing Vikran Sanghera took play to halfway, quick ball was released, fly half Packham’s excellent footwork took him through the defensive line and flanker Cort was on his shoulder to take his pass, outpace the defence and dot down beneath the posts for a try that Packham converted. 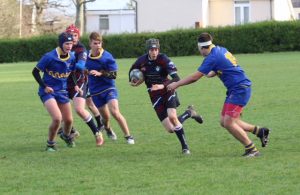 Gowerton fly half Paul Packham who contributed 15 points and was player of the match.

The visitors continued to press for the rest of the half and again looked certain to open their account when a break by centre Remy McCarthy took him deep into the hosts 22, prop Ott carried on powerfully but a crunching tackle by No.8 Kaniewski stopped him in his tracks and Gowerton were able to clear. 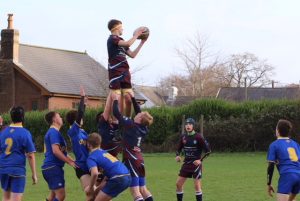 At the break Gowerton held a seven point advantage and with the wind at their backs in the second half turned around in confident mood. That confidence was not misplaced and they added two further tries in the first 10 minutes of the second period.
The first came from a lineout on the visitors’ 22. Hooker Purcell’s accurate throw was delivered off the top by flanker Terry, replacement scrum half Rhys Richards’ accurate service gave Packham the opportunity to attack from first phase, his impressive footwork took him outside his opposite number and on this occasion he required no support and sprinted clear to score a try that he added the extras too.
In the 44th minute, wing Scott Howells took play deep into the visitors’ 22. St. Aloysius were penalised at the resulting 5 metre scrum, No.8 Kaniewski tapped it quickly and powered over for a try his dynamic all round performance deserved. Fly half Packham added the extras giving the hosts a comfortable advantage. 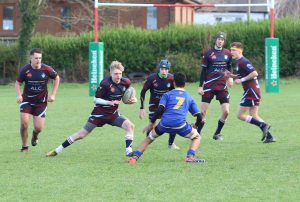 However, the visitors were not going to leave Wales without a fight and were deservedly on the board when the impressive distribution of half backs James Morrisey and Francis Dunkin released No.8 Hill and he drove over from 10 metres.
This score shook any hint of complacency from the hosts and they stretched their lead when Packham kicked intelligently behind the onrushing defence, centre Matthew Davies re-gathered and rounded the last man to score a try that Packham converted.
Gowerton added two further scores in the final 10 minutes, the first came after good approach work from centre Davies established a position from which hooker Purcell was able to drive over, then replacement No.8 Adam Williams outstripped the cover to score in the corner. Player of the match Packham added the extras to the first score. 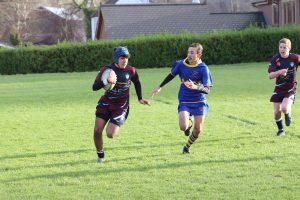 Gowerton wing Vikran Sanghera gets outside his opposite number.

Fittingly, the visitors had the final say when scrum half Morrisey kicked ahead, re-gathered and freed wing Conor O’Kane who sprinted clear to score in the corner.
The final whistle followed and the tourists will travel to play Wimbledon College for their final game looking for a win that will allow them to fly home with a record of two wins and two defeats.
After the game presentations were made at a reception in Penclawdd RFC. The billeting Gowerton students then took the tourists to watch Gowerton RFC take on Whitland in the National league before travelling to Parc Y Scarlets with them to watch the Scarlets take on Bayonne in the European Challenge Cup.