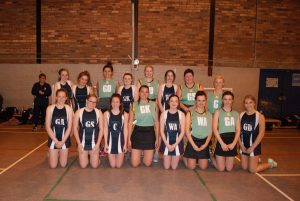 In preparation for their summer tour to South Africa and Australia, Gowerton School’s netball squad have joined the Swansea netball league and after a victory over Medics 17-8 in their first game they followed up with a 10-3 defeat to Tawe B. They continued their fixtures with a game against Pontardawe G and it was the team from the Swansea Valley that came out on top winning 26-10.
Pontardawe were well served by Goal defence Imogen Davies and Goal keeper Sofia Gibby whose height made it difficult for Gowerton’s shooters, centre Lauren Maxwell linked play well and the accuracy of Goal attack Aimee Merrick and Goal shooter Nerys Ubsell ensured that the scoreboard was continually advancing.
Pontardawe had the first centre pass and took the lead with a goal from Ubsell but Gowerton were level when excellent centre court passing by Casey Williams, Ashley Coppin and Megan Nicholson and movement into the goal third enabled them to drive the ball into the circle for Goal attack April Pickett-Jones to make a successful shot.
At the end of the first quarter Pontardawe led 6-3.

Gowerton started the second quarter on the front foot and effective dodging in the circle by Goal shooter Rebecca Willetts created the space for centre Lucy Steadman to make a clear pass through to April Pickett-Jones who scored and when she added another goal shortly afterwards Pontardawe’s lead was reduced to one.
However, with Pontardawe’s centre Maxwell controlling play, her team had stretched their lead to 11-6 by half time.
In the second half Pontardawe increased their lead with their joint players of the match Goal shooter Ubsell and Goal attack Merrick unerring in their shooting and it took several great interceptions by Gowerton’s ‘Seren y Gem’ Casey Williams and determined defence from Goal keeper Eva Rees to stop Pontardawe adding to their lead even further.

At full time the score was 26-10 to Pontardawe and their experience and team work together with outstanding shooting made them worthy winners. However, their youthful opponents had produced a great effort that will serve them well as they continue to build towards their tour.