Gowerton’s year 9 team travelled to St. Helens for the Swansea schools’ cup final to take on neighbours Gwyr. They realised they faced a tough challenge against a Gwyr side they had never previously beaten and with their opponents having reached the final of the Welsh Cup they knew they’d be going into the game full of confidence. 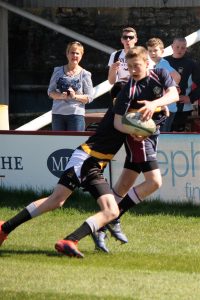 Alex Graham-Woollard looks to pass back inside. 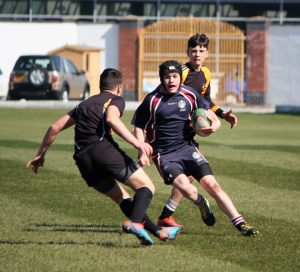 Teigue Williams takes on his opposite number.

In the early stages, Gwyr’s confidence was not misplaced and Gowerton’s early handling errors allowed Gwyr to apply the early pressure and as a result powerful flanker Troy Davies drove over in the corner to open the scoring in the 5th minute.

With fly half Alex Hughes marshalling his side excellently and centre and captain Teigue Williams leading the team intelligently, Gowerton began to take control of the game and they took the lead in the 9th minute when Gwyr had a clearance kick charged down and flanker Sam Terry showed great awareness and flexibility to score beneath the posts for a try that fly half Hughes converted. 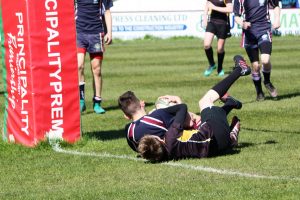 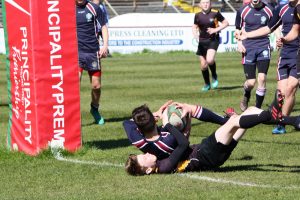 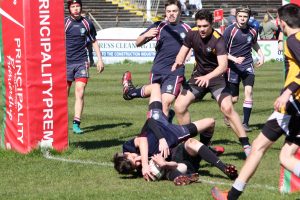 As the half progressed, Gowerton continued to grow in confidence and with the back row of Terry, Darragh Cahill and Ryan Stagg defending tenaciously and the front row of Peter Legg-Davies, Jamie Parry and Owen Parry on top in the set piece they were able to allow the backs to move the ball into space and were rewarded in the 21st minute when an excellent mazy run from wing, Alex Chislett took him past three defenders and deep into Gwyr’s 22, he offloaded to flanker Terry who squeezed the ball down for his second score. Alex Chislett attempts to get outside his opposite number. 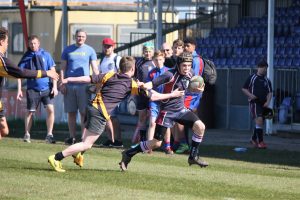 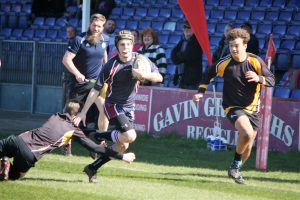 Alex gets around him. 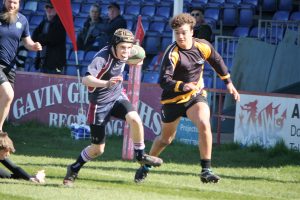 Alex is away on his run to set up Sam Terry for the second try.

The second half began with Gowerton on the attack, impressive fly half Hughes made a break on halfway that took him past two defenders and into Gwyr’s 22, a burst from centre Teigue Williams was halted short of the line by some desperate defence, but scrum half Kieron Bevan sniped down the blindside of the ruck to stretch the lead

Gwyr’s response was immediate and fine handling allowed wing Toby Jones to cross in the corner, at the break Gowerton led 12-10. 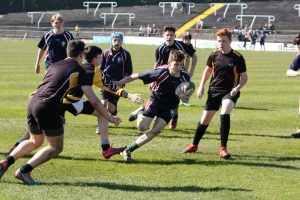 Kieron Bevan spotted a gap on the blindside of a ruck. 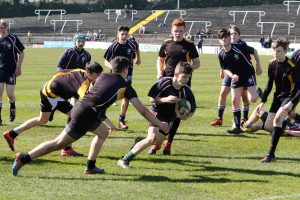 Kieron sniped through the gap. 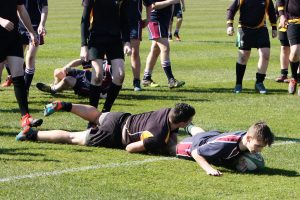 Kieron crossed for a try to stretch Gowerton’s lead.

Gwyr had powerful carriers in flanker Davies and scrum half Brandon Jones and  Gowerton’s defence was severely tested, but initially they were not going to be breached with flankers Terry and Stagg, lock Leo Pietrapertosa, wing Alex Graham-Woollard and full back Morgan Couch all making telling contributions. 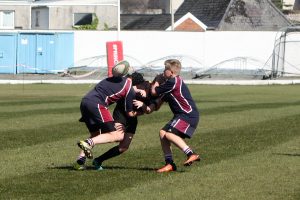 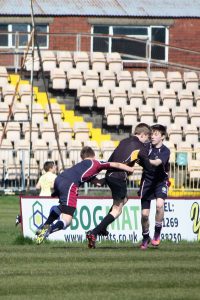 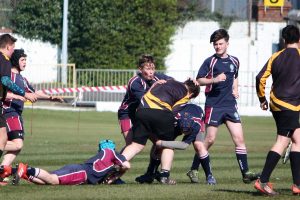 Gwyr’s power eventually bore fruit, and in spectacular fashion with a hat-trick of tries from impressive scrum half Jones, that turned the game on its head, one was converted by fly half Louis Davies and from trailing by 7 points they led 27-17.

It seemed that Gwyr’s strong runners would take the game beyond Gowerton, but fly half Hughes, captain Teigue Williams and man of the match Terry had other ideas and inspired their side to redouble their efforts. They were rewarded when hooker Jamie Parry powered into the 22, Gwyr were penalised for killing the ball. The penalty was taken quickly and centre Teigue Williams drove over for a score that fly half Hughes converted.

With three minutes left, an intelligent kick into space by centre Gavin Williams established an attacking position in Gwyr’s 22 and they were again penalised for killing the ball. Gowerton realised that a penalty would tie the scores, but bravely took the attacking option and kicked to the corner. They were rewarded when a clever lineout move saw No.8 Darragh Cahill peel around the front to score. Fly half Hughes’s excellent touchline conversion stretched the lead to four points. 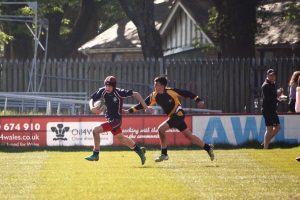 Alex Hughes takes on his opposite number………… 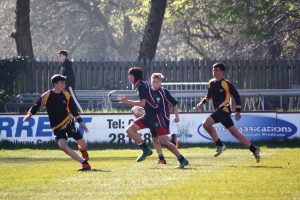 Gwyr are nothing if not resilient opponents, and proved it, when with the last play of the match they moved the ball wide and wing Ioan Martin crossed in the corner. The conversion was missed, the final whistle followed and it was they who lifted the trophy by the narrowest of margins in a game that had been an outstanding advert for schools’ rugby and from which both sides deservedly took great credit.