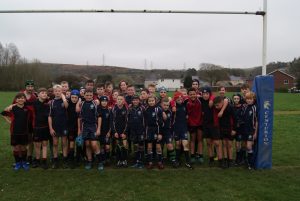 The Pontarddulais and Gowerton year 7 squads together after the game.

Gowerton’s year 7 team travelled to Pontarddulais to take on the hosts in a group game in the Swansea schools’ cup.
The visitors kicked off and dominated the first quarter that was spent almost entirely in the hosts’ 22. For the visitors, props Tyler Penhorwood and Harvey Marshall, lock Finn Lewis and centres Ethan Davies and Tyler Davies all carried strongly. The hosts’ defence was severely tested but refused to yield with No. 8 Callum Lloyd, hooker Louis Daniels and prop Tyler Mobfana all resolute defenders.
With their defence on top, Pontarddulais gained in confidence and in the 15th minute a good clearing kick from centre Jaden Evans led to a ruck on halfway, the hosts won possession and strong running No.8 Lloyd broke clear and showed an excellent turn of pace to outstrip the cover and dot down beneath the posts for a try that centre Evans converted. 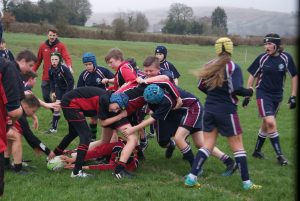 Gowerton were back on the attack from the kick off with their back row of Jac Lewis-Colwill, Jacob Garlick and James Wells all working hard to secure possession, however, they were unable to transfer their pressure into points due to a combination of the hosts’ resilient defending and their own handling errors. At the break, Pontarddulais led 7-0.
Gowerton started the second half as they had ended the first and in the second half they eventually breached the hosts’ defence. Lock Finn Lewis won a lineout on halfway, the ball was transferred to centre Tyler Davies who evaded the first tackle, the cover defence stopped his progress on the 22 but he transferred the ball to centre partner Ethan Davies who had the pace to make it to the try line, the conversion was wide but the deficit was down to two points.
Stung by this score, Pontarddulais now took control of the game with their powerful forwards who had been restricted to a defensive effort in the first half now taking control of the game and with front row forwards Daniels and Mobfana, lock Logan Roberts and No.8 Lloyd all carrying strongly they camped inside the visitors 22.
It seemed certain that the hosts would increase their lead and initially they were unable to do so only because of the excellent defensive work of scrum half Iwan Pearce-Morgan, lock Isobel Baldwin-Pritchard and man of the match flanker Lewis Colwill. Pontarddulais were held up over the line on three occasions, inevitably the pressure told and with ten minutes to go lock Logan Roberts powered over. Five minutes later, Roberts’s strength saw him grab a second score and Evans added the extras. 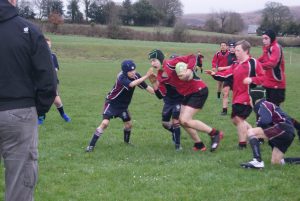 Gowerton had the final say when a fine run by centre Ethan Davies saw him evade three defenders to cross for a try he converted himself. The final whistle followed and the hosts were victors as a result of their uncompromising defence and powerful pack.