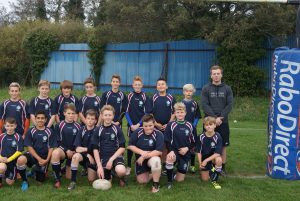 In the year 8 game, Gowerton came out on top 39-5. The scoreline didn’t reflect the fact that the teams were well matched and Gowerton were forced to defend for long periods. 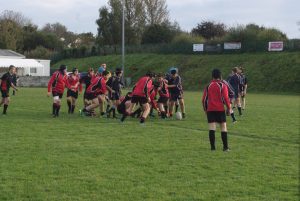 All eyes on the loose ball.

Pontarddulais flanker Matthew Osbourne worked hard at the breakdown and with fly half Jack Hughes probing intelligently and centre Aidan Hughes carrying strongly, it needed some excellent defensive work from centres Joe Hawkins-Cole and Henry Aiono and wing Will Thomas to prevent the visitors from crossing more often.

The hosts’ advantage came as a result of the pace of their back row with Caradog Kaniewski and man of the match Ben Cort both impressive.

The hosts led 17-5 at the break. Fly half Paul Packham opened the scoring when he tapped a penalty quickly and dived over. Kaniewski and Cort also grabbed a try apiece, one of which Packham converted before Pontarddulais responded when hooker Jacob Bemrose powered over.

In the second period, Gowerton scored four more times with Kaniewski completing a personal hat-trick and Cort crossing for a second time before full back Taylor John completed the scoring with a well deserved try. Fly half Packham added another conversion. 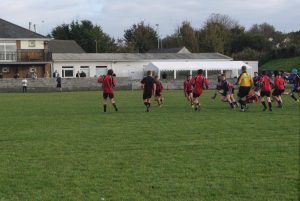 Joe Hawkins-Cole looks for a gap.

In the year 7 game, Gowerton led 15-10 with time almost up, but Pontarddulais centre Finley Edwards dived over to tiethe scores and grab the visitors a deserved share of the spoils.

For Gowerton, centres Lewis Roberts (2) and Joe Britto scored tries while half backs Jamie Riordan and Nino Romanello distributed well and flanker Jamie Terry and No.8 Jac Meredith were both busy.

Pontarddulais were well served by centre Ben Newbury-Davies and debutant prop Ciaran Evans and fly half Iwan Jones and No.8 Finley Edwards scored their other tries.

Gowerton’s year 10 team travelled to the festival at Penyrheol and returned with 10-0 wins against the hosts and Olchfa.