Home  |  Two out of three for Gowerton against Cwmtawe.

Two out of three for Gowerton against Cwmtawe.

Two out of three for Gowerton.

Gowerton and Cwmtawe took each other on at three age groups. All the games were extremely competitive and at the final whistle there was less than a score separating the sides in each game.

At year 10 level Gowerton travelled to Cwmtawe and kicked off against a Cwmtawe side who had ‘put the visitors to the sword’ when the two sides met last season. Gowerton applied the early pressure with a dominant forward pack, enabling the backs to gain some good early possession. 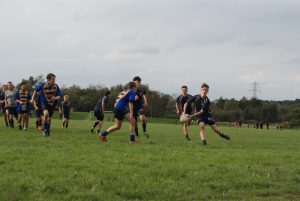 The visitors took the lead in the 6th minute, centre Jacob Turatto made good ground before being tackled, lock Kai Presdee showed his slight of hand to scoop the ball up one handed and sprint to the line.

Two minutes later, Cwmtawe found space and some weak defensive work allowed Liam Osman to level the scores. Joseph Hawkins added the conversion to edge his side in front. 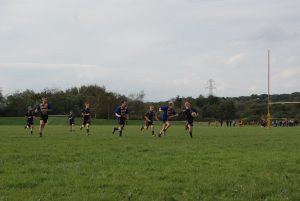 Year 9s Ethan Lee takes on his opposite number.

Gowerton’s front row of Rhys Flower, John Edwards and Mabon Kaniewski carried the ball well in the loose, and regularly made good ground, but indiscipline allowed the Cwmtawe scrum half to take a quick tap penalty and his pass out wide enabled wing Ryan Chappell to cross.

Gowerton grew in confidence and the back row of Jacob Rees, Matthew Hutchison and Alex Jones were busy in the loose enabling the team to work their way upfield. A penalty in the 17th minute allowed fly-half Charlie Smith to kick to touch, and the resulting catch and drive enabled flanker Rees to cross the try line bringing Gowerton to within a score of the hosts. Gowerton were now on the front foot and another penalty to the visitors was taken quickly by scrum half Tom Davies – the ball was spread wide and winger Tim Perkins ran hard making good ground before offloading to supporting lock Connor Williams who crossed to give his side the advantage 15-12 at the break.

Cwmtawe applied the early pressure in the second period but solid defence from centres Turatto and Charlie Williams prevented the hosts from crossing the gain line, and when the ball was turned over, full back Joel Matuschke was on hand to kick the ball down field to set up a lineout in Cwmtawe’s 22. Lock Connor Williams won possession and a good pick up from hooker Flower set up a ruck from which Williams crashed over for his second try extending Gowerton’s lead. Replacement hooker Jac Simons and prop Ethan Hall added fresh impetus to the visitors when they came on, looking busy in defence and strong in the scrums, allowing Gowerton’s back line to get on the front foot with the back three of Daniel Warne, Matuschke and Perkins all creating problems with ball in hand. The hosts though had plenty of opportunities of their own and when they kicked behind the defence winger Liam Osman won the chase to score and Hawkins’s conversion reduced their deficit to a point.

The game continued to be evenly balanced between two very good sides but it was the visitors who sealed victory when a slick lineout move enabled prop John Edwards to power over.

The year 9 teams played at Elba, both sides scored three tries and the match was decided by the goalkicking of fly half Rhys Dix.

With hooker Jamie Parry, flanker Teigue Williams and No.8 Darragh Cahill all carrying strongly Gowerton raced into a 12 point lead after 10 minutes courtesy of a brace of tries from pacey wing Alex Chislett. The first score came after a powerful run by No.8 Cahill and the second followed good work from centres Kieron Bevan and Alex Graham-Woollard. Fly half Gavin Williams kicked one conversion.

The visitors responded with a three try burst in a five minute spell midway through the first half. The first came when lock Iestyn Adkins powered over from short range. Then wing Iestyn Lewis showed both pace and power to sprint from his own half for two tries and with fly half Dix converting all three the visitors led 21-12 at the break. 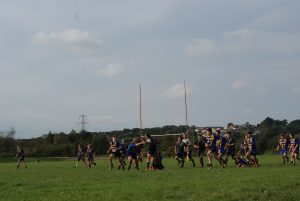 The hosts reduced the arrears early in the second period when No.8 Cahill dived over in the corner after good work by hooker Parry and prop Jack Bailey.

In the final quarter, Gowerton pushed for the try that would win them the game, but Cwmtawe’s defence refused to yield and they returned home with the spoils.

The year 8 game was an ‘end to end’ affair with the lead changing hands on several occasions and it was Gowerton who were hanging on at the end to secure the win.

Gowerton’s tries were scored by No.8 Caradog Kaniewski who grabbed a hat-trick, centre Joe Hawkins-Cole and hooker Lewis Flower.

Cwmtawe replied with a brace from Lewis Nolan and one apiece from Finley Brookman and Cameron Ennis.