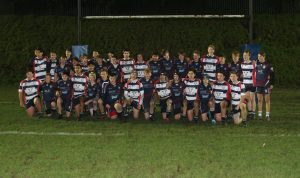 The Gowerton year 10 and Victorian Schools’ under 16 ‘B’ team after their game at Gowerton RFC.

The parents and students of Gowerton School billeted 42 Australian rugby players last week when they hosted the visiting Victorian Schools’ squads from Australia.
The visitors were on the fifth leg of their tour of Great Britain, Ireland, France and Belgium and arrived in Gowerton having won 9 of their previous 10 fixtures
The main focus of the visit came when the school played the visitors in two matches with the schools’ year 10 team playing against the visitors’ under 16 ‘B’ team and the year 11 team playing their ‘A’ team. 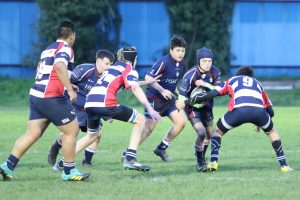 The Victorian schools’ team was a representative side selecting from all schools across the state and contained players from 23 different schools mainly in the Melbourne area. With their school year starting on January 1st it meant the visitors were both older as well as drawing from a bigger pool of talent, as such Gowerton faced a significant physical challenge in both games-it was a challenge they faced with great resolve. 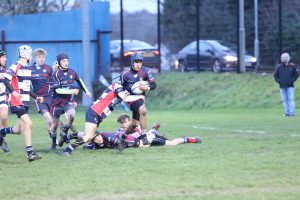 During the day, with the visitors having come into school during the morning, the Gowerton lads could see the significant challenge they would face later in the day but rather than being daunted by that challenge there was a real buzz around the school as they looked forward to the games.
Both matches were played under floodlights at Gowerton RFC with a healthy crowd of several hundred in attendance. The year 10 game kicked off first and it was clear the hosts were in for a tough test when visiting flanker Michael Tereszko powered over in the first minute.
That opening try only served to motivate the hosts and with back row forwards Ben Cort and Robyn Williams driving aggressively into the tackle, Gowerton began to gain the upper hand in the contact area. 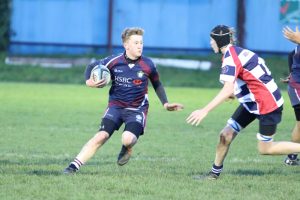 Robyn Williams looks for a gap.

Scrum half Ceiron Williams’s crisp service allowed fly half Paul Packham to release his outside backs and centres Joe Hawkins-Cole and Will Thomas and full back Taylor John all caused the visitors problems with ball in hand. 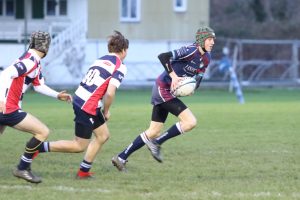 Fly half Paul Packham released his outside backs.

Gowerton were back on level terms when centre Thomas claimed a loose ball inside his own half his ‘eye for a gap’ allowed him to breach the defensive line and sprint clear, with the cover defence closing in, he cleverly beat the last man by carrying the ball in both hands and crossed in the corner for a fine individual try. 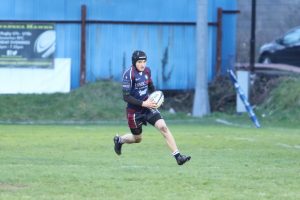 Victorian schools’ were back in front midway through the first half when first lock Angus Farnan and then flanker Callum Burns crossed for tries, but Gowerton kept in touch when flanker and man of the match Caradog Kaniewski replicated Thomas’s score when he gathered a loose ball inside his own half and set off on an arcing run that allowed him to cut through the visitors defence before demonstrating an excellent turn of pace to race to the corner. At the break the hosts trailed 17-10. 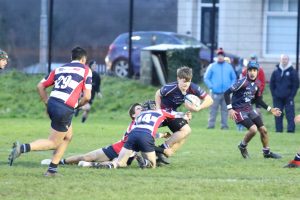 The third quarter of the game saw the Victorian Schools attacking relentlessly but Gowerton’s defence refused to yield and with the back row of Cort, Kaniewski and Robyn Williams continuing to impress by consistently driving their larger opponents backwards in the tackle they were able to force mistakes and thwart their attacks. However, as the hosts tired in the final quarter the visitors crossed for four more tries with flanker Tereszko powering over for three more and scrum half Conor Sargent adding another and at full time the visitors’ power saw them come out on top 41-10.
The second game was another that was keenly contested with the power of the visitors’ pack evident from the start and they raced clear with prop Jonathan De Bono, flanker Tom Moeller and No.8 Boyd Marshall all scoring in the first quarter.
Despite the difficult start Gowerton tried to create openings of their own with centre Gavin Williams probing intelligently and they reduced the deficit when impressive wing Teigue Williams was given the space to power over in the corner and at the break the visitors led 17-5.
In the second half, lock Jacob Purcell and prop Peter Legg-Davies both carried strongly in the loose whilst centre Tom Davies and flanker Adam Williams both tackled well.
Lock Noah Myerscough crossed for the hosts’ second score and fly half Tom Barrington added the extras. In reply, prop De Bono and No.8 Marshall scored a second try apiece for the visitors who came out on top 37-12.
A notable aspect of the two games was that they were refereed by former pupils whose fathers, also former pupils, had been international referees. The first game was overseen by Jon Walters whose father Gwynne had officiated in 22 internationals. Jon is now a barrister in chambers in Cardiff and referees in the local senior leagues at Division 1 level. In charge of the second game was Ben Whitehouse, currently one of Wales’s 4 professional referees, his father Nigel was the man in the middle of 21 internationals. It was fitting that such a notable occasion was overseen by officials with such rugby history coursing through their veins.
After the games, presentations were made to both teams before the visitors departed to spend a second night with their billets.
The visit was a memorable occasion for both groups with many friendships and bonds being made between students that may last a lifetime. Despite the score lines of both games, the resilience and strength of character of both Gowerton teams saw them emerge with great credit and served to make them aware of the challenge they face when they undertake their own three team and fifteen match tour to South Africa and Australia next summer.