Year 10 pushed all the way to the cup. 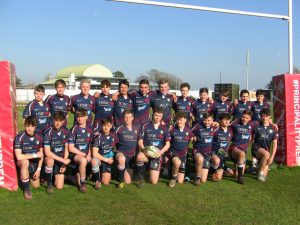 Gowerton’s year 10 team travelled to St. Helens’ for the Swansea schools’ cup final, brimming with confidence after their convincing 41-0 victory over last season’s finalists Bishopston in the previous round.

Gowerton started positively and with their powerful forwards carrying strongly they attacked consistently in the first quarter with forwards Ethan Hall, John Edwards, Mabon Kaniewski and Alex Jones to the fore. 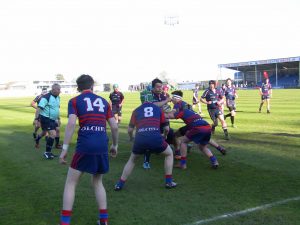 However, Olchfa’s defence was magnificent with hooker Ben Davies and flanker Luke Evans both prominent and although Gowerton hammered away incessantly at the Olchfa try line the Sketty school refused to yield.

Having resisted Gowerton’s initial thrusts, Olchfa grew in confidence and opened the scoring in the 19th minute with a fine individual try from strong running centre Callum Dodd who had the pace to go on an arcing 40 metre run that took him around the defence for a try that fly half Louie Thomas converted.

There were no further scores before half time and at the break, Olchfa led 7-0.

Gowerton began the second half as they had done the first and were on level terms within 5 minutes when a fine run by centre Ben Petherbridge took him into Olchfa’s 22, he transferred to industrious lock Connor Williams who continued the move before transferring to prop John Edwards 5 metres out and he bulldozed his way through three defenders to cross beneath the posts for a try that fly half Charlie Smith converted. 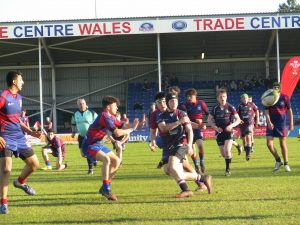 Olchfa continued to give as good as they received with centre Dodd a constant threat and always able to get across the gain line and they retook the lead with 20 minutes to go when Gowerton were offside in their 22 and fly half Thomas converted the penalty. 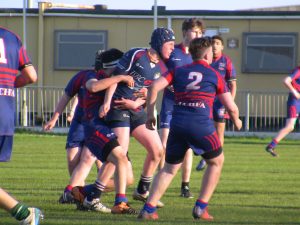 Matthew Hutchinson helped to revitalise the team in the second half.

Gowerton’s second half replacements revitalised the team. Matthew Hutchinson and Tim Perkins dominated the forward exchanges and with scrum half Tom Davies forming an effective partnership with fly half Charlie Smith they probed for the opening that would take them in front. Initially, Olchfa’s defence refused to buckle but Gowerton’s pressure told with 5 minutes left when, from a scrum beneath the posts fly half Smith took play to the right allowing wing Daniel Warne to score in the corner. 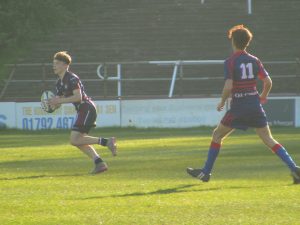 Now trailing, Olchfa knew the onus was on them to get the next score, but with lock and man of the match Connor Williams and prop John Edwards continuing to carry strongly it was Gowerton who finished on top and they sealed victory with the final play of the game when good work by Edwards gave full back Matthew Newcombe the opportunity to show his silky footwork and he avoided two would be tacklers to cross for the try that guaranteed Gowerton victory and at the final whistle they received the trophy for the third consecutive year.