Year 8 win 3 out of 3 at Bryntawe festival

The objective of the festival was to broaden the accessibility of rugby to pupils in schools with games being competitive but with the prime aim being to involve as many youngsters as possible in playing.

That aim was epitomised by the fact that both Ystalyfera and Bryntawe, having qualified for the last 16 of the Welsh schools’ cup had selected ‘B’ teams to attend the festival.

The competitive nature of the games encourages players to develop team skills but with no overall winner at the end of the festival, personal involvement and development rather than winning is the primary motivation.

Gowerton’s first two games were against teams who had beaten them convincingly before Christmas. It is a gauge of how much Gowerton have improved that they were able to reverse both those earlier defeats.

Their first game was against Penyrheol, and the crisp handling of the Gorseinon school meant they held the advantage in the first quarter. Their pressure was rewarded when pacy wing Joe Thompson was given space 30 metres out and evaded two tacklers before dotting down in the corner to open the scoring.

Gowerton’s pack gradually took control of the forward exchanges. Prop Owen Evans and hooker and man of the match Marley Bushell were a dynamic presence in the contact area and with the forwards securing an increasing supply of possession, scrum half Jake Riordan was able to release his ‘fringe’ runners. Penyrheol found it particularly difficult to contain prop Charlie Owen and he twice burst clear from 40 metres to score tries that earned his side a victory 10-5.

Gowerton’s second game was against Morriston and boosted by the confidence gained from their win against neighbours Penyrheol they were on the front foot immediately and it was that man Owen again who opened the scoring when he burst through three tacklers and powered over. Despite the biting cross wind that made handling difficult, Gowerton’s backs handled confidently with fly half Nino Romanello, full back Lewis Roberts and centres Joe Brito and Cai Rees all impressing. Centre Brito, full back Roberts and fly half Romanello all finished off handling moves by scoring tries that gave their side a comfortable lead. 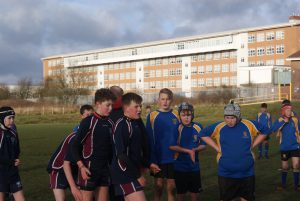 Gowerton prepare for a line out against Morriston.

However, it was man of the match Owen who had the final say crossing for two more scores to complete his personal hat trick and leave his side victors 30-0.

The final game saw Gowerton taking on Ystalyfera. The Swansea Valley side competed strongly in the early stages with No.8 Teilo Morris and wing Leo Meyrick both looking dangerous. A try from centre Joe Brito settled Gowerton down and they took control of the forward exchanges where man of the match Joel Dicks worked tirelessly.

As Ystalyfera tired, Gowerton crossed three more times with wing Luca Garner-Beynon fly half Nino Romanello and centre Cai Rees all getting their names on the scoresheet to give their side victory by 20 points.