Home  |  Year 9 come out on top at Pontarddulais.

Year 9 come out on top at Pontarddulais.

Gowerton’s year 8 and 9 teams travelled to Pontarddulais for their final group matches of the Welsh schools’ cup competition.

The year 9 game was a high scoring affair which included 12 tries.
Gowerton got off to a flier and raced into a 24 point lead inside the first quarter. They opened the scoring in the 5th minute when flanker Scott Bennett secured possession, fly half Tyler Cooper chipped ahead and won the race to touch down for a try he converted himself. 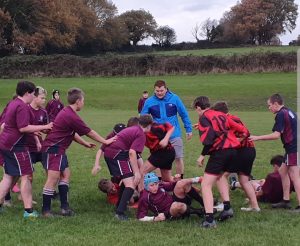 The sides all search for the ball.

Two scores in the next five minutes from wing Sam John stretched their lead, the first came as a result of good work by scrum half Will Price whose swift service gave John the room to go outside his man on half way and sprint clear for a score again converted by Cooper. John’s second score came after good work by full back Charlie Steadman, No.8 Harvey Thomas and lock Tristan John.
Wing John then turned provider when his clever cross field kick bounced well for wing Matthew Pewsey who gathered and dotted down in the corner.
Pontarddulais’s response was both emphatic and impressive as they dominated the next quarter crossing for three tries of their own. 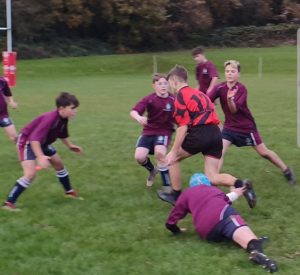 Mckenzie Sinclair, Jayden Grey and Josh Barnett all converge on an attacker.

Prop Spencer Wolf took possession 20 metres from Gowerton’s line and brushed aside several would be tacklers to score a try No.8 Ethan Phillips converted. Then No.8 Phillips scored himself after good work from lock Iwan Hill-Jones, flanker Rhys Honey-Jones and centre Rhys Watkins.
Prop Wolf then grabbed a second try, this one was a sensational effort and saw him evading several defenders before sprinting clear from deep inside his own half to score. No.8 Phillips added the extras and at the break the hosts had reduced the deficit to 5 points.
The visitors needed to respond quickly and it was again Cooper who instigated things with a chip ahead, but this time it was centre Rhys Craven who won the chase to claim the score.
The game was now very much end to end and the hosts reduced the deficit when good work by flanker Honey-Jones resulted in another score.
Gowerton then stretched their lead when wing Pewsey crossed for his second try after good work from Mckenzie Sinclair. Back came the hosts and more good work from centre Watkins and lock Hill-Jones resulted in another score, but Gowerton had the final say when scrum half Jayden Grey fed prop Joe Wright and he powered over from short range.