Gowerton entertained Dyffryn Taf from Whitland at Gowerton RFC in the 3rd round of the Welsh schools cup. Conditions were perfect for open running rugby and neither side disappointed producing a game with some impressive running and offloading before two late tries confirmed the hosts’ passage into the last 16, in the process keeping alive their hopes for a visit to the Principality stadium for the final in April.

Gowerton opened the scoring in the first minute when scrum half Iwan Jones attacked down the blindside of a scrum and fed centre Kieran Charles who powered over from 30 metres. Fly half Dexter Ryde added the extras.

The early score may have lulled the hosts into a false sense of security, but they were quickly jolted out of it by the visitors who grabbed 17 unanswered points in the next ten minutes. In the 4th minute, a penalty for offside was converted by fly half Llew Jones from 25 metres before in the 6th minute flanker James Thomas and then five minutes later centre Rhys Campbell both crossed. Fly half Jones converted both. 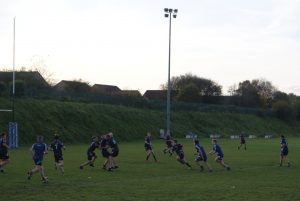 Jason Stagg and Will Griffiths look to secure possession.

Stirred into action, Gowerton dominated the period either side of the break with hooker Aled Simons working tirelessly in the loose and linking impressively with lock Ryan Stagg and flanker Jack Soproniuk in the line outs. With the majority of possession, half backs Jones and Ryde were able to dictate play allowing centres Charles and James Northey and flanker Joe Bright all to create problems with ball in hand.

In the 20th minute, a strong run by hooker Simons saw him tackled just short. From the resulting scrum, flanker Bright powered over. Five minutes later, the visitors were penalised for offside in their 22 and Ryde stepped up to reduce the deficit even further. With five minutes left until the break, flanker Soproniuk grabbed a deserved score when he was on hand to take an inside ball 40 metres out and sprint clear to score a try that Ryde converted. On the stroke of half time excellent work from scrum half Jones secured possession on half way. The ball was worked wide to impressive centre Charles who sprinted clear from 30 metres to cross in the corner and give the hosts a 27-17 advantage at the break.

In the 43rd minute, Gowerton put themselves firmly in the box seat when a counter attack led by flanker Bright and centre Charles was finished off by a fine arcing run from wing Max Treharne that allowed him to score between the posts, fly half Ryde added the extras.

Dyffryn Taf weren’t prepared to go out without a fight and with the quality of their passing creating opportunities out wide, centre Dan Evans, full back Josh Davies and wing Seb Howells all crossed and with Davies adding two conversions they led by two points with six minutes to go.

Gowerton needed someone to step up and it was man of the match Charles who did so, he took a short pass from fly half Ryde 40 metres out and powered through several would be tacklers to get to the line to complete his hat trick, Ryde again converted. 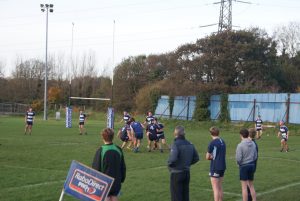 The hosts sealed their passage into the next round in the final minute when good work from tireless lock Stagg took play deep into the visitors’ 22 allowing captain and prop Ryan Hughes to stretch over from short range. Ryde converted and the final whistle followed shortly afterwards.