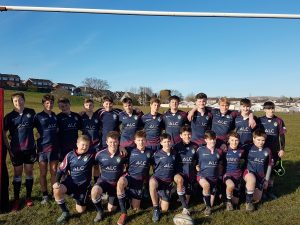 Gowerton year 10 travelled to their close neighbours to play their final group game in the qualifying stage of the Swansea schools’ cup.

With both sides having lost to Bishopston but beaten Bishop Vaughan, Bishop Gore and Birchgrove, the game would determine who would finish as runner-up in the group and qualify for the cup semi-final whilst the loser would go into the plate competition.

Gowerton were first to settle and with locks Ryan Stagg and Ollie Freeman both effective in the lineout and prop Peter Legg-Davies carrying strongly their forwards gradually gained the upper hand. Scrum half Matthew Davies’s excellent service gave half back partner Kieron Bevan time on the ball to control territory and Gowerton opened the scoring in the 10th minute when a neat chip by centre Teigue Williams was caught on the full by wing Morgan Couch and he raced to score in the corner.

Minutes later, it was Couch who crossed again, when deft handling by centre Alex Graham-Woollard released him and he again sprinted clear. Both scores were well converted by full back Alex Hughes and when he added a penalty the visitors appeared comfortably in control leading 17-0.

The hosts refused to buckle and with flanker Dylan Price and No.8 Ollie Rees both carrying strongly they enjoyed the better of the second quarter crossing for two tries with first centre Shane Devey and then full back Ethan Davies getting onto the scoreboard. At the break Gowerton’s lead had been cut to 17-10.

With confidence boosted by their improved form at the end of the first period, it was Penyrheol who started the second half on the front foot, but having had their line breached twice, the visitors were determined not to concede again and with captain and flanker Sam Terry, hooker Jamie Parry and lock Jacob Purcell all defending strongly they repulsed the hosts’ early attacks.

Then in the 38th minute Gowerton stretched their lead, a loose pass by the hosts just outside Gowerton’s 22 was seized upon by centre Graham-Woollard, he reacted quickly whilst others hesitated and found the space to release wing Couch, he took the ball up to the hosts 22 and as the cover defence closed him down he cleverly cross kicked, fly half Bevan gathered and scored a try that full back Hughes converted.

The next score was going to be crucial and both sides had opportunities before, in the 53rd minute, full back Hughes achieved a turnover on Penyrheol’s 22. The ball was quickly moved to the backs and centre Teigue Williams put wing Couch over in the corner for him to complete his hat-trick.

In the final minute of the game, Gowerton completed the scoring when scrum half Conor Bevan worked hard to force the hosts to ‘minor’ in goal, from the resulting scrum, possession was again moved swiftly out wide and this time centre Gavin Williams intelligently drew the last man and put impressive full back Hughes over for a try that he converted himself. The final whistle followed soon afterwards and Gowerton qualify to play cup holders Gwyr, away in the semi-final.