The year 7 rugby squad travelled to Bryntawe to take part in the Ospreys west region festival and after a slow start in their first game against Pontarddulais they improved significantly to record fine victories against Olchfa and Bryntawe. 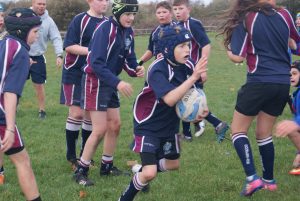 The first game was very much a contrast of styles. Pontarddulais had a powerful pack of forwards with prop Tyler Morfanna and lock Logan Roges both strong carriers and Gowerton found it difficult to contain them.
Pontarddulais attacked from the kick off and looked likely to score only to be denied by a great tackle by prop Tyler Murphy that resulted in a penalty for not releasing 5 metres from Gowerton’s line. Fly half Cameron Bevan tapped it quickly and sprinted clear from the 22, he then had the pace to outstrip the chasing defenders and score the opening try. 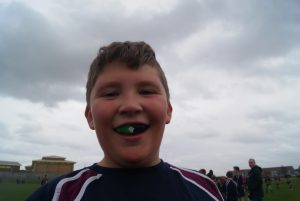 The power of the Pontarddulais pack was evident in the next 5 minutes and they crossed for two tries when first prop Morfanna and then lock Roges drove over to give their side the lead.
Gowerton tried to work their way back into the game by looking to release their pacier backs whenever they had the opportunity and good work by scrum half Jacob Garlick created space for centre Reuben de Vall he made ground before releasing co-centre Ethan Davies and his arcing run took around the defence for the equalising score.
The result, like the score was now very much in the balance and it was Bont’s forward strength that won the day when prop Morfanna took the ball on the charge 15 metres out, brushed aside 3 tacklers and scored. The final whistle followed and Pontarddulais had a deserved win.

In their second game it was a tussle with neighbours Olchfa. The two schools had enjoyed two close encounters earlier in the season with Olchfa winning one and the other drawn. On this occasion it was Gowerton’s turn to come out on top. 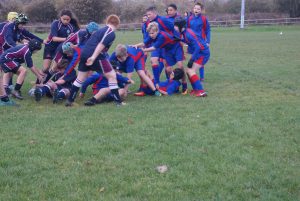 Gowerton and Olchfa’s forwards battle for the ball.

In the first half Gowerton had the strong wind in their favour and with half backs Garlick and Bevan releasing their outside backs cleverly, centre Reuben de Vall put wing Ben Hughes in space 20 metres out, his elusive running allowed to beat the last defender and open the scoring.
In the second period, Gowerton’s pack began to dominate the forward exchanges with No.8 Tyler Davies and lock Richard Davies both carrying strongly and with lock Georgia Aiono and flanker Isobel Baldwin-Pritchard impressing in the contact area. Gowerton doubled their lead when No.8 Davies drove forward, lock Aiono’s impressive technique at the ruck secured quick ball which released centre Ethan Davies and his pace took him clear for the second try. 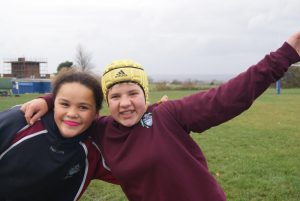 Georgia Aiono and Isobel baldwin-Pritchard who impressed in the contact area.

Olchfa weren’t going to go down without a fight and they scored a try of their own in the final minute when Alex Phillips raced in at the corner. 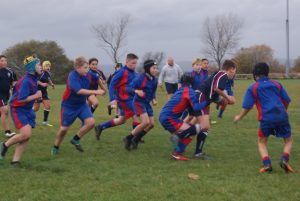 Tyler Davies carried strongly and takes on the Olchfa defence.

Gowerton’s final game was against hosts Bryntawe. Against the wind in the first period flankers Jac Hawkins and James Godbear worked hard to secure Gowerton possession and again it was the pace of the backs that was the biggest threat to the hosts. First, fly half Cameron Bevan’s quick feet allowed him to race clear and open the scoring.

Bryntawe full back Alfie Sadler raced clear and it took an excellent tackle from full back Reuben de Vall to stop him equalising, flanker Godbear secured the loose ball and released centre Ethan Davies who raced clear to double the score. 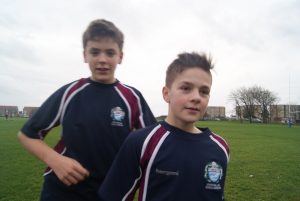 Richard Davies and James Godbear who each won player of the match awards.

With the wind at their backs in the second period, Gowerton were favourites to stretch their lead, but Bryntawe showed great fight to dominate territory and it was they who looked most likely to get the next score. No.8 Solomon Billygore was particularly impressive carrying strongly and both full back Sadler and scrum half Logan Jenkins were dangerous when in possession. However, Gowerton’s defence was excellent with prop Tyler Murphy, hooker Nathan Gardiner and flanker Godbear all working tirelessly.