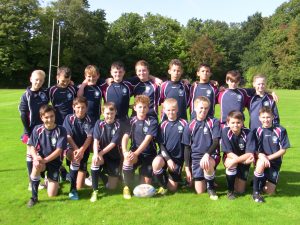 Year 8 travelled to Bishop Gore for their opening group game in the Welsh schools under 13 cup competition.

It was the hosts who applied the early pressure with lively outside half Ben Sullivan probing for gaps, but Gowerton’s defence was unflinching with lock Joel Dicks, No.8 Jac Meredith and half backs Ceiran Gratrix and Jake Riordan all making telling contributions. 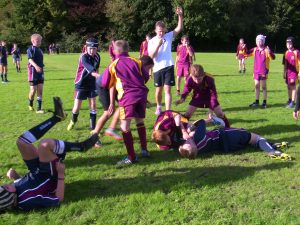 Jac Meredith fights for the ball on the ground. Joel Dicks demonstrates how he can ‘ride a bike’ on his back.

The visitors gradually gained the upper hand. Hooker Owen Evans monopolised scrum possession allowing his side ample opportunities with ball in hand and with prop Charlie Owen driving powerfully and flanker Jamie Terry running elusively they pressed for a score that arrived in the 12th minute. Flanker Terry breached the defence, prop Owen carried up to the line, he was tackled just short but centre Joe Brito was in support to cross in the corner.

Confidence boosted, Gowerton continued on the front foot and stretched their lead in the 17th minute when a pacey run by wing Cian Jenkins stretched the hosts, allowing captain and fly half Jake Riordan to score a try he converted himself.

The early part of the second period saw Gowerton continuing on the front foot with lock Logan Miller, centre Cai Rees and man of the match, prop Owen all increasingly influential. In the 28th minute, more elusive running from flanker Terry, put full back Nino Romanello in space and he showed an excellent turn of speed to sprint 60 metres to score a try to which Riordan again added the extras. 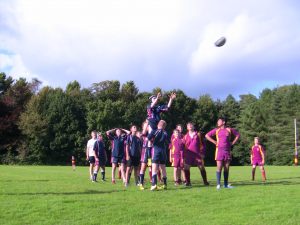 Gowerton, stretched their lead when wing Cian Jenkins entered the line from the blindside and punched a hole that allowed him to score beneath the posts. Riordan added the extras.

The visitors held a comfortable 26 point lead going into the final quarter, but it was Bishop Gore who dominated the rest of the game. Their powerful forwards, with Nathan Thomas, Billy Leyshon and Alend Saeediyan all prominent, dominated the contact area and they were rewarded with 5 minutes left when fly half Sullivan spotted a gap on the blindside to score a try his team’s efforts deserved. 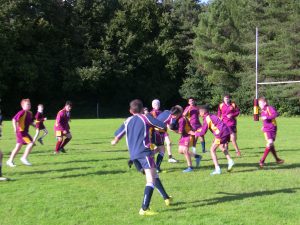 Gowerton play Gwyr at Elba on Tuesday of next week (3.45ko), in their second group match.