Gowerton School’s junior rugby teams were all involved in Swansea School’s cup semi-finals and it was mixed fortunes with two teams qualifying for the final while the other three will have to wait for another year.

Pride of place amongst the Gowerton performances went to year 11 against Olchfa. Last season the two sides had contested the final and Gowerton had eventually come out on top scoring with the last play of the game to secure the trophy. On this occasion though, victory was achieved much more comfortably.

Gowerton were on the front foot from kick off with locks Alex Jones and Connor Williams the key figures in the line outs and flanker Jacob Rees dominating the breakdown. They took the lead in the 5th minute when wing Daniel Warne burst clear, he was tackled in the 22, quick ball followed and No.8 and captain Matthew Hutchinson’s accurate pass gave opposite wing Matthew Newcombe the time and room to score. Scrum half Joel Matuschke added the conversion. 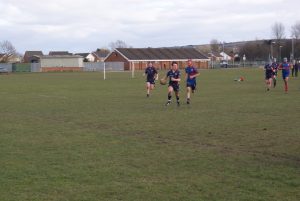 Olchfa responded with a spell of pressure in the hosts’ 22, but Gowerton’s defensive effort was unyielding with centres Jacob Turatto and Charlie Williams, lock Williams and flanker and man of the match Jacob Rees all to the fore. The visitors were unable to break through and in the 13th minute it was Gowerton who scored their second try when they broke down the blindside from a scrum on halfway. No.8 Hutchinson made good ground and when confronted by the last defender fed scrum half Matuschke who darted in from 30 metres.

Five minutes later, a line out steal by lock Williams led to a penalty. Again it was Hutchinson and Matushke whose quick thinking put Gowerton on the front foot and a clever chip over the defence by Hutchinson was well recovered by fly half Charlie Smith and although he was tackled just short of the line he was able to stretch out to claim the score.

The hosts registered their fourth unanswered try just before half time when wing Newcombe showed his electric pace to grab his second score. Scrum half Matuschke added the extras and at the break Gowerton led 24-0.

Olchfa had found it tough to cope with the energy and pace of Gowerton’s game, but the break allowed them to reassess and they started the second half forcefully, strong midfield runs from centre Oscar Muxworthy and full back Sam Powell put them on the front foot and prop Jim Young powered over.

Gowerton’s forwards were the stronger ball carriers with Mabon Kaniewski, Ethan Hall, Jac Simons and John Edwards all gaining yards when in possession and they added a fifth try when Edwards powered through several tacklers to score a try converted by hooker Simons.

The visitors continued to compete strongly at the breakdown with No.8 Josh Rupersinghe and flanker Miles Vincent both winning turnovers and prop Young crossed a second time following some good offloading, full back Powell added the extras. 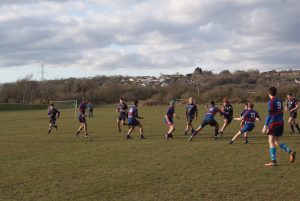 However, the hosts were back on top in the final quarter, scrum half Tom Davies rounded off good work by hooker Simons and wing Ben Petherbridge, fly half Smith converted. Centre Charlie Williams then ran a great angle on halfway to break clear, co-centre Kobe Bowen took it on and fed wing Petherbridge on the 22 and he scored, before with the final move of the match Gowerton counter attacked from deep allowing impressive scrum half Davies to grab his second score.

At the final whistle Gowerton’s win was a comfortable 48-12 and they now await news of who they will meet in the final.

Again this was again a contest between the two finalists from last year which Gwyr had won by virtue of a last gasp try in an excellent game in which the lead changed hands several times. 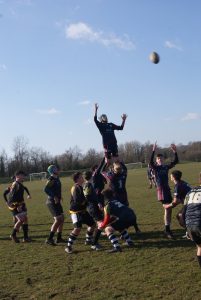 This game, played at the Elba was as keenly contested, Gowerton had the advantage of the wind in the first half but Gwyr’s defence proved unyielding and was not going to be breached despite the probings of full back Alex Hughes and Teigue Williams.

However, the game’s key player was home scrum half Brandon Jones and once his side were in front he used the elements intelligently to keep his side in front.

This was a ferociously contested match with both sides wanting a place in the final but it was Olchfa that came out on top.

The hosts signalled their intent to run the ball at every opportunity but outstanding Gowerton defence kept them at bay and with impressive flankers Caradog Kaniewski and Ben Cort dominating the breakdown they achieved a number of turnovers.

The first score didn’t arrive until the 20th minute, Gowerton took the ball into contact around half way but didn’t secure the ball, Olchfa’s Harvey James stole the ball and sprinted down the blindside to score a try he converted himself.

Although against it physically up front, Gowerton kept trying to move the ball at every opportunity with full back Taylor John, centre Joe Hawkins-Cole and wing Will Thomas all looking dangerous with ball in hand, however, they found it difficult to retain possession against the combative Olchfa pack and at half time the hosts led 7-0.

Gowerton started the second half the brighter of the two side and good interplay between the backs and forwards allowed flanker Cort space out wide and he showed an impressive turn of pace to beat three defenders and score a try that fly half Paul Packham converted to level the scores.

This score only served to spur the hosts on and they began to ask questions of the Gowerton defence. A barrage of attacks eventually began to tire the visitors’ defence and with just over 10 minutes remaining Olchfa’s second try arrived and James again added the extras.

Gowerton continued to look for a second score, but it was the hosts who grabbed the final score with a few minutes remaining leaving the final score 21-7 that didn’t reflect a very closely contested match between two strong sides.

Following their quarter final win over Gwyr, Gowerton travelled to Bryntawe for their semi final. Having been defeated at Bryntawe 56-0 only 6 weeks previously they knew they faced a tough challenge.

Gowerton were determined to give a good account of themselves and despite being on the back foot for almost the whole game they tackled tenaciously throughout with prop Charlie Owen, hooker Marley Bushell, No.8 Andrew Clifford, fly half Nino Romanello, centres Cai Rees and Joe Brito, wing Madoc Jenkins and full back Sam John all giving their all.

However, Bryntawe are a talented side possessing power up front and pace and guile behind and crossed for eight tries with centres Josh Kenny (3) and Morgan Davies (2) locks Harrison Doe and Rowan Lewis and No.8 Dafydd Roberts all crossing the whitewash. Six tries were converted and the hosts moved comfortably into the final.

Gowerton travelled to Morriston to compete in the Bowl Semi-Final.

The teams were evenly matched and both started really well – Gowerton impressed early on with their passing which provided wings Scott Bennett and Matthew Pewsey with plenty of early opportunities. Despite this, Morriston scored first with a well worked score after strong running from their forwards.

Gowerton were on the back foot and when they lost influential full back Sam John with suspected concussion they knew they had a real battle on their hands. A reshuffle of the team saw Harvey Thomas at outside half, Ellis Williams at No.8 and Rhys Craven, who looked comfortable under the high ball, at fullback.

Charlie Steadman was influential at scrum half – passing well under pressure and kicking well defensively, these qualities were key to the fight back. Gowerton scored through wing Euan Riley and full back Rhys Craven and converted one and with Morriston also crossing for a second try and the scores were tied at 12-12 as they entered the final ten minutes.

A strong team talk from Trystan John who has grown into his role as Captain rallied the troops and the breakthrough came when a sweet and well timed pass by fly half Harvey Thomas released full back Rhys Craven for the winning try, Thomas added the extras and Gowerton led 19-12 with minutes remaining. The hosts pushed for an equalising score but Gowerton’s defence held firm

and enjoyed their victory – they look forward to their Final next week when they play Cefn Hengoed. Man of the Match went to debutant wing Euan Riley who ran hard in possession and tackled well throughout, while forward of the match was given to prop – Joseph Wright who once again was very effective making hard yards and tackling aggressively.