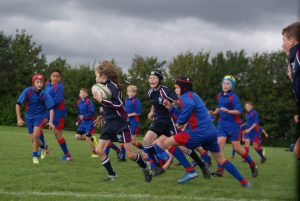 Aled Jefferies takes on Olchfa in the year 7 festival-Ethan Davies is in support.

Gowerton School’s 1st XV travelled to Olchfa for their opening Ospreys schools’ premier league fixture and in a very hard fought game it was the hosts who eventually came out on top.

The game got off to a dramatic start when Gowerton’s debutant lock Sam Terry caught the kick off but was tackled in the air, landing heavily on his shoulder. The reckless tackle earned Olchfa wing Olly Winchester a yellow card – thankfully Terry was OK to continue.

The visitors looked to try and make their numerical advantage count and excellent lineout throwing by hooker Rhys Flower to locks Terry and Reid Davies allowed their backline to get their hands on the ball early. Fly-half Iwan Jones released centres James Northey and Tom Davies who were able to get over the gain line in midfield allowing wingers Joe Legg and Zac Johns early touches of the ball, however, the hosts’ defence was resolute and could not be broken down.

The first real Olchfa attack came when they made a break from the base of the scrum that took them deep into the Gowerton 22, only the scramble defence of full back Cameron Clayfield prevented a try. The hosts were awarded a kickable penalty for offside but opted for the scrum. Strong carries by a number of Olchfa forwards looked like they would yield a score, but fly half Iwan Jones demonstrated great technique to turn the ball over allowing centre Northey to clear the lines, but when the ball didn’t go into touch, Olchfa winger Winchester gathered on half way and ran powerfully through a couple of tackles to score the game’s opening try. The half time whistle followed shortly afterwards and the hosts held a five point advantage at the break.

The second half started with Olchfa on the front foot, and when the visitors were penalised for failing to roll away in front of the posts, fly half Jack Cheyney made no mistake stretching the lead to eight points.

Gowerton sensed they needed the next score and centre Davies cut a lovely angle in the opposition 22 to set up a platform close to the hosts’ line. Powerful carries from forwards Leo Pietrapertosa, Jacob Purcell and Rhys Flower edged them closer to the line, and when Olchfa conceded a penalty, it was tapped quickly to prop McCann who although held up short was able to offload to lively scrum half Jacob Williams who burrowed over from close range.

The game continued to ebb and flow and Olchfa were back on the attack from the kick off, it looked like flanker Leon Bevan had made an excellent tackle and turnover, but a penalty for sealing off at the ruck was awarded to the hosts and fly half Cheyney again converted.

Gowerton were only a converted score behind, and pressed for the winning score in the last 5 minutes but the hosts’ defence refused to yield and when time ran out Olchfa emerged with the victory.

For Gowerton, the man of the match award went to lock Terry for his tireless work at the breakdown and excellent technique in the lineouts.
Next week, in the second round of fixtures, Gowerton host Neath College and Olchfa travel to Brynteg.
In other games played this week Gowerton had mixed fortunes. The year 9 team hosted Maesydderwen at Waunarlwydd RFC and achieved a convincing victory by 50 points to 7 with No.8 Andrew Clifford to the fore and crossing for four tries.
The year 8 team found it tougher when they travelled to Penyrheol and despite fly half Sam John’s try they lost 30-5.
The year 7 squad travelled to Morriston to play in the Ospreys festival against teams from Ystalyfera, Olchfa, Birchgrove, Pontarddulais, Bryntawe and hosts Morriston and returned with an impressive record of 3 wins and a draw from their five games. 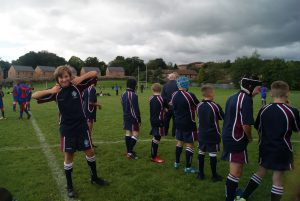 Before the tournament it was thumbs up from Finn Lewis.

They started with two games against Ystalyfera winning one 5-0 thanks to flanker James Godbear’s try but going down 15-5 in the other despite a try by full back Ben Hughes.
Next up, they took on Olchfa and it was a story of the 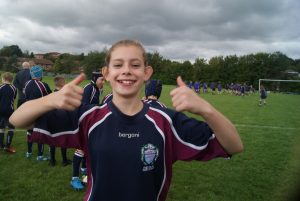 two centres; Jack Hoskins (Olchfa) and Tyler Davies (Gowerton) who grabbed a brace of tries each in a game that ended in a 10 all draw.
As the festival progressed, Gowerton began to develop a better understanding of each other’s play and in both of their final two games against Birchgrove and Pontarddulais they crossed for three unanswered tries. Against Birchgrove, full back Reuben DeVal, fly half Cameron Bevan and wing Drew Dodd all scored and another strong performance against Pontarddulais saw centre Ethan Davies, wing Jacob Garlick and scrum half Iwan Morgan all dot down to allow Gowerton to return home with a spring in their step. 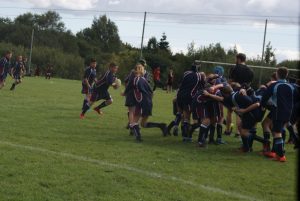 Tyler on the charge against Ystalyfera.

For Gowerton, lock Jorja Aiono was awarded their player of the tournament for her strong defensive work and excellent technical work at the breakdown.
Next week year 7 and 10 travel to Cefn Hengoed and year 8 and 9 entertain Pontarddulais at Waunarlwydd RFC.