Gowerton’s year 10 team travelled to Bryntawe and in an enterprising game in which both teams looked to take every opportunity to attack with ball in hand it was the hosts who came out on top by virtue of kicking an extra conversion after the two teams had shared 12 tries. 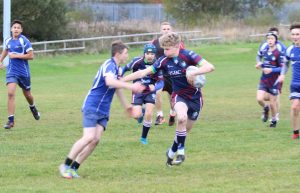 Full back Taylor John, scorer of four tries, hands off an opponent.

The hosts settled first and with their forwards working well as a unit they established a twelve point lead inside 5 minutes with two quick fire tries from Taylor Edmonds and Dafydd Roberts. 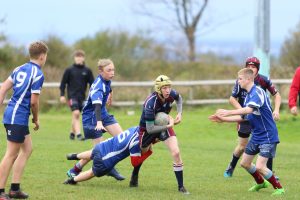 The visitors roused themselves and reduced the deficit when strong running centre Joe Hawkins-Cole beat several would be defenders on his way to the try line. 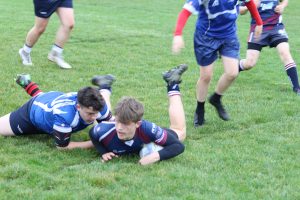 Joe Hawkins-Cole scores one of his two tries.

Bryntawe restored their 12 point advantage immediately. They reclaimed the kick off and after some nice interplay between backs and forwards they worked Cory Hywerford into space and he crashed over for their third try. 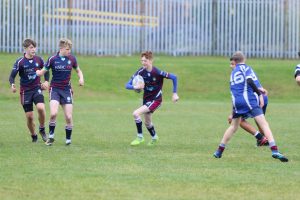 After a subdued start the visitors with lock Kian Webb winning a lot of quality lineout possession had their best spell of the game playing some very good attacking rugby. They scored three unanswered tries with centre Hawkins-Cole and full back Taylor John (twice) crossing. Fly half Paul Packham added two conversions to give Gowerton a 24-19 lead at the interval. 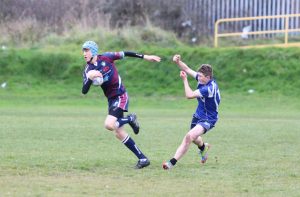 After the break the visitors continued on the front foot and full back John completed his hat trick when he gathered a loose kick on halfway and carved his way through the defence to dot down beneath the posts. 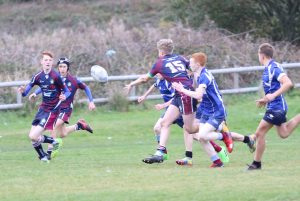 Full back Taylor John gets the ball away to Tom Griffiths.

Gowerton now held a 10 point lead but the hosts were not going to be denied and they established a lead of nine points when centre Harrison Thomas took advantage of some weak defensive work by the visitors and crossed on three occasions. 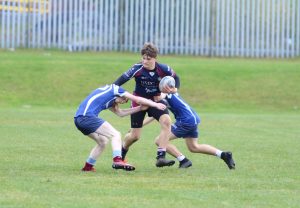 As the game entered its final phases, good defensive work by lock Charlie Catto saw Gowerton awarded a penalty on the Bryntawe 22 they tapped it quickly and crisp handling gave full back John the room to cross for his fourth try, fly half Packham converted to set up a tense finish, but Bryntawe’s defence was not going to be breached again and it was they who finished in front by virtue of kicking an extra conversion. 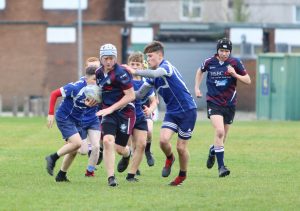 Honours even in Pontarddulais and Gowerton matches.

Gowerton’s year 8 and 9 teams travelled to Pontarddulais and it ended one win each for the two schools.

In the year 8 game, Pontarddulais started strongly and held the advantage at forward with flankers Ethan Giles and Rhys Honey-Jones both carrying strongly and they took the lead when centre Bradley Burchill burst through two tackles to cross.
Gowerton realised that they needed to play a bit wider to allow them to negate the hosts’ forward advantage and early in the second half the excellent passing of fly half Rhys Craven and full back Charlie Steadman allowed centre Sam John to get outside the cover on halfway and show an impressive turn of pace to sprint clear and score beneath the posts. Fly half Craven added the extras and Gowerton were in front for the first time.
The visitors, with confidence boosted by this score, now enjoyed their best period of the game with man of the match Charlie Steadman a constant threat with ball in hand and defending strongly. Half backs Jayden Grey and Craven controlled the game cleverly allowing their side to dominate field position.
With prop Jake Brophy, flanker Scott Bennett and lock Rhodri Davies all working tirelessly Gowerton won a constant supply of possession and wings Elliot Chislett and Rowan Lewis were a threat whenever in possession. It looked like they would increase their lead on several occasions, but Bont’s defensive work was unflinching with back row forwards Giles and Honey-Jones again to the fore.
Gowerton eventually increased their lead with 10 minutes to go, but rather than being created by the visitors it was an error by the hosts’ that led to the score-attempting to run the ball out of defence, Gowerton’s centre Sam John intercepted a loose pass inside the hosts 22 and raced under the posts for his second try.
In an attempt to bring themselves level, Pontarddulais threw everything at the hosts in the final minutes but Gowerton’s defence refused to yield with centres John and Will Price and man of the match Steadman all tackling strongly and they kept their line intact allowing them to return home with a win their second half improvement deserved.

Clifford brace not enough for year 9.

The home team were much the better team in the year 9 game and emerged as comfortable winners with lock Evan Randell, No.8 Kian Hier and fly half Iwan Evans all stand out performers for the hosts.
Gowerton fought hard throughout with wing Madoc Jenkins tackling strongly and running well whenever he had the opportunity. They replied with a brace of tries from No.8 Andrew Clifford one of which was converted by fly half Jake Riordan.