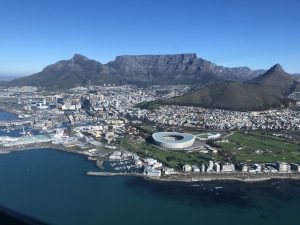 Last minute packing done, Helen, Bobby and I depart from home at 12.50pm. We arrive at Park Road at just after 1.00pm. It’s already busy, but thanks to all the parents, the bus bays are clear and the offloading of cases and young people (and some slightly older ones!!), goes smoothly.

Gerald (bus 1) and Colin (bus 2) pack the coaches, they manage to fit everything in, it’s a bit of a squeeze but they just about manage it.

Normally it’s a member of staff who’s last to arrive-but Mr Thomas is married now and his wife Helen has him well organised and on time. Like my wife, she’s looking forward to some peace and quiet while we are away.

All are present by 1.45pm, we stop for a ‘team’ photo before we depart and are en route at just before 2pm.

Gerald informs us that we’ll have to go straight through to Heathrow as they were working early on Sunday morning-a little disappointing, but it means we should have more time to buy something in the airport.

Mr Lewis reminds us that Leon Bevan had made a pre tour bid to be the first holder of the ‘Donkey of the Day’ shirt.

At training on Tuesday, we still hadn’t received confirmation that his visa for entry to Australia had been granted. Mr Lewis asked him if he had applied. “I don’t need one sir” Leon replied, and proceeded to get his bank card out of his wallet “Look, I’ve got Visa on this.” Mr Lewis pointed out that the two things were different and that he needed to apply quickly or he may have to fly home after the South African leg. Thankfully, Leon’s Visa application was granted by Thursday and a much relieved Leon was able to forward it to Miss Vaughan.

We crossed the Severn Bridge at just after 3pm and with things all quiet on our bus I rang Mr Thomas to check on things on bus 2. “All quiet on here,” he said, “I think I’ve got 33 little angels!” “Time will tell!” I said.

Despite the fact that this weekend was predicted to be the busiest of the year with traffic on the roads swollen by the large number of people off on their annual holidays, we made good time on the M4 and arrived at Heathrow at 5.30pm.

The buses dropped us outside Terminal 2. We said ‘Goodbye’ to Gerald and Colin and I went ahead to organise things at check in. Oh dear!!-I left the passports of my group behind on the bus-luckily Mr Lewis spotted them and brought them along but that may be something I hear about again when the first ‘Donkey of the Day’ vote takes place.

However, I’m not the only one to leave things on the bus, Sam Wells left his headphones and retainer behind-luckily for him Miss Preuss and Miss Morgans spotted them when they did the last minute bus check.

It’s a ten minute walk to Terminal 3 but the groups are well disciplined and make their way there in orderly fashion. Peter Cort helps by waiting outside the terminal to direct the final groups to check in.

The British Airways staff are expecting us and greet me with, “You’re in charge of the party of 82-I can see why you’ve got no hair left!”

Tamryn from our travel company is there to help us check in and initially, it goes well, Miss Vaughan checks on case weights and most are within the 20kg limit-well done mums and dads. Teigue Williams and Miss Morgans are at 21.5 kgs each, Betsan Gates and Liam Butler 21.9 kgs but the record went to Chloe Thomas with 22.3 kgs! “Sorry sir, not my fault, I had to pack my Irish Dancing clogs so I can do some practice while we are away.”

Charlie Catto’s case at 14 kgs was easily the lightest.

There is no problem with overweight cases as the limit on the international flights is 23kgs, however, it’s only 20kgs on the internal flights we take. I asked Tamryn what was the likely excess baggage charge for 2kgs-she wasn’t certain but said it could be between £30-£50. There could be a few people asking Charlie to put some of their items into his case-perhaps he’ll be taking up Irish Dancing in the near future!

We encounter our first major problem-Raffi Richards’ name on his passport doesn’t match that on the flight passenger manifest. Airlines are fastidious about ensuring they match and it may mean he is not allowed on the flight. Miss Vaughan works her magic and after half an hour he’s allowed on the flight-hopefully he’ll be allowed entry into South Africa-we all have our fingers crossed. Raffi is relieved and the problem is certainly not of his making.

Leah Hyatt had raised a few eyebrows amongst the BA staff, when having had her case weighed she asked whether she should take it back-“Are you taking it on as your hand luggage?” the steward asked.

We proceed with our hand luggage to security and that certainly isn’t without its problems;

Leon Bevan hadn’t taken note of the restrictions on liquids and his full size sun cream and shampoo containers went in the bin-Dr Hughes can empathise with that from 2009-he still hasn’t forgiven me for not telling him the regulations beforehand-it cost him £30!!!

Billy Davies’s toothpaste was similarly too large. As a result, security did a full search of his bag. A little flustered he repacked but when he went through left his passport behind. Luckily someone picked it up and gave it to Mr Meredith who was coming through a little later.

I was last through and almost caused an international incident-as I walked through, the alarms started blaring-“Sit down there and take your shoes off.” One security officer shouted at me, another then made me stand in an X-ray machine with my hands over my head-phew, the X-ray revealed my replacement metal knee had caused the issue. A fellow traveller said to me “You look like a dodgy character-that’s why they were so concerned.”

We were all through security by 7.00pm and give the group an hour to get something to eat with a meet time of 8.00pm. All are back on time and we wait for our departure gate to be announced.

Charlie Catto has lost his headphones. He purchases a new pair (£36) in Heathrow. He has then proceeded to lose the new ones he bought by the time we land in Cape Town but then miraculously finds the original ones he had lost!

Noah Myerscough came back really perturbed-he’d bought a large bag of M and Ms that cost him £6. He went to the shop next door and they were on offer at 3 packs for £10.

Kind hearted Miss Morgans offers the staff one of her cocktail sausages. “Are they gluten free?” I ask, “Of course they are” she replies confidently, feeling a little peckish I was only too glad to have one. Having indulged myself I ask her “How do you know they are gluten free?” “Because it only says on the pack that they shouldn’t be eaten by anyone with a wheat allergy.”

The other staff quickly put in place a contingency plan in the likely event that I may be taken seriously ill. Mr Thomas was quickly sworn in to take over the tour leadership role and promised sobriety for the next 3 weeks!! The other staff decided they would draw lots to have my ‘Business Class’ seat-Not a lot of concern for me there.

Boarding goes smoothly, but we are a little late taking off at 10pm-rumour went around the party that an ambulance had had to be called for one of the passengers in Business Class!!

After take off the captain informs us that we will be flying for just over 11 hours-a long night is in front of us.

As the plane turns south, those on the left of the plane enjoy tremendous views of London at night and then prepare to settle down to an evening viewing the wide selection of films or listening to the varied choice of music available.

A big day lies ahead of us tomorrow-landing in Cape Town followed by a trip up Signal Hill, lunch in the Victoria and Albert waterfront and then the helicopter flight before we check in to our hotel and then finish the day with a meal in the Greek restaurant back in the V and A. At some point in the day there will also be the first ‘Donkey of the Day’ vote-no doubt there will be plenty of contenders. Let’s keep our fingers crossed for good weather.