Gowerton’s year 10 and year 8 teams travelled to play Cefn Hengoed at Bonymaen RFC. After two entertaining and enterprising games it was the visitors who returned with two victories.

Cefn Hengoed had impressive performances from Jack Ace and Jackson Hughes and scored twice with Felipe DeMacado and Cairan Berry both getting over the whitewash.

Gowerton were pushed hard but with hooker and man of the match Marley Bushell to the fore and well supported by No.8 Jac Meredith, impressive scrum half Jake Riordan and centre Cai Rees they crossed for 4 tries of their own with centre Joe Brito, wing Rhys Searle, flanker Robyn Williams and fly half Paul Packham all crossing. Fly half Packham added two conversions allowing them to claim the win.

In the year 8 game Gowerton’s team spirit was impressive as a result they were able to cross for seven tries. Wing Elliot Chislett, whose elusive running was a constant threat to the hosts, centre Lewis Holloway and prop Oscar Havard all crossed for a brace of tries whilst fly half and captain Sam John added a seventh. For the hosts, Logan O’Driscoll scored a well constructed try and there were good performances from Lewis Cook, Mason Rees and Josh Davies.

Gowerton’s year 7 team travelled to Sketty Lane to play Bishop Gore in the first round of fixtures in the Swansea Schools’ league. It proved to be a tough challenge for the hosts, particularly due to the fact that few of the team had played rugby before. Nevertheless, they played with great spirit with hooker Jaydon Webster, back rowers Lukas Harkus and Ben Richard-John and scrum half Evan Bodger tackling tenaciously throughout.

Gowerton took the lead in the 3rd minute when hooker Finn Lewis took a scrum against the head on the hosts 22. Scrum half Jacob Garlick attacked the blind side before feeding centre Drew Dodd who scored in the corner. 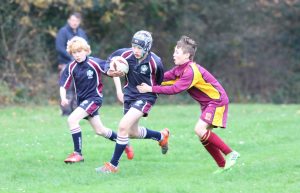 Gowerton centre Drew Dodd can’t escape the grasp of his opposite number.

Five minutes later, the visitors doubled their lead when full back Caerwyn Richards broke clear just outside his own 22, he was brought down 20 metres from the line but centre Cameron Bevan was in support and took his pass to score. 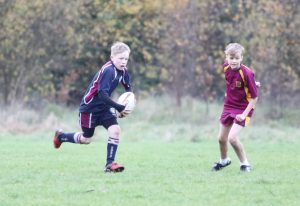 A scrum on the hosts 22 led to the next score. No.8 James Wells picked up, committed the last defender and fed scrum half Garlick who darted across for a try that was converted by Iwan Pearce-Morgan. 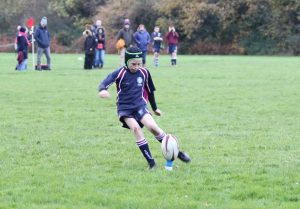 Another score followed swiftly when elusive running by wings Aled Jefferies and Morgan Bradley took play into Bishop Gore’s half, lock Jac Jones was in support and fed fly half Jack Lewis-Colwill who sliced through the defensive line to increase the lead. 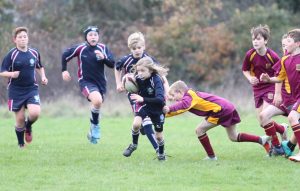 Gowerton wing Aled Jefferies tries to get away from the cover.

Two more tries were added before the interval and both were the result of the powerful running of back row forwards James Wells and Tyler Davies. First, Wells brushed aside several would be tacklers to drive over and score in the corner and then on the stroke of half time, a clever line out move on half way allowed Tyler Davies to break clear, his impressive turn of speed took him clear of the cover to dot down beneath the posts. Full back Reuben DeVall added the extras and the visitors held a 34 point advantage at the break. 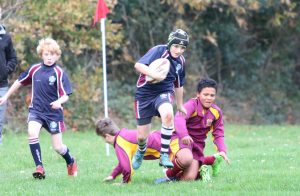 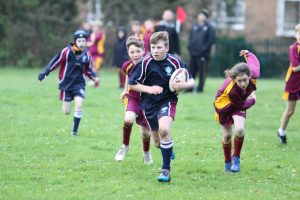 The hosts started the second half on the front foot with flanker Lucas Harkus and hooker Jaydon Webster both running strongly, but the visitors’ defensive line held firm with flankers Jac Hawkins and Fin Guard and locks Jorga Aiono and Isobel Baldwin-Pritchard all working hard.

It was the visitors who stretched their lead in the final 10 minutes when centre Ethan Davies broke clear on his own 10 metre line and sprinted 50 metres for a fine individual try before scrum half Garlick finished off good work by lock Richard Davies and prop Josh Anderson. Scrum half Pearce-Morgan converted both scores and Gowerton had got their league programme off to an encouraging start, whilst Bishop Gore had shown enough positive signs for them to be confident that they had the basis of a good team if they keep working hard. 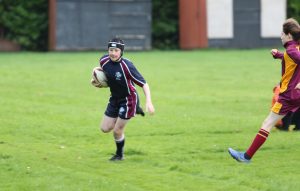