The Pontarddulais and Gowerton year 8 squads.

Gowerton’s year 8 side travelled knowing that victory could see them qualify for the knockout stages of the competition. However, any confidence they’d gleaned from recent performances was dashed when the hosts established a 14 point lead inside 3 minutes.
The hosts kicked off and Gowerton were hesitant in clearing the ball from their 22. Possession was turned over and pacy flanker Tom Rees sprinted clear for a try that centre Josh Hughes converted. Pontarddulais doubled the lead from the kick off and again it was flanker Rees who was to the fore. He brushed aside two weak tackles initially and then raced clear to score ‘beneath the poles’. Centre Hughes added the extras and Gowerton realised they had to improve their efforts if they were going to be able to gain the win they required.
The visitors had the more cohesive pack with prop Josh Anderson, hooker Nathan Gardiner, lock Richard Davies and flanker James Wells all working well together.
Gowerton reduced the deficit in the 9th minute when good lineout ball was claimed by flanker James Garlick and when the ball was moved swiftly into midfield centre Tyler Davies sliced through the defence for a try that scrum half Iwan Pearce-Morgan converted. 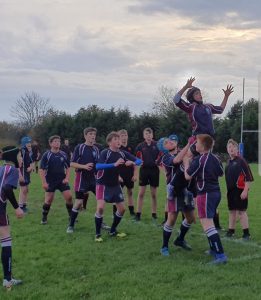 Five minutes later Gowerton were level when No.8 and player of the match Jac Lewis-Colwill powered over after strong carries from prop Anderson and lock Finn Lewis. Pearce-Morgan again added the extras.
The visitors were now on the front foot with the work of flanker Wells particularly impressive at the breakdown. They pressed for a score that would give them the lead but flanker Rees, No.8 Lloyd and prop Toby Dean all defended resolutely and they kept their line intact until the break and the teams turned around with scores even.
The visitors began the second period as they had ended the first and were rewarded when lock Lewis scored in the corner after good work from centre Ethan Davies and wing Daniel Chung. 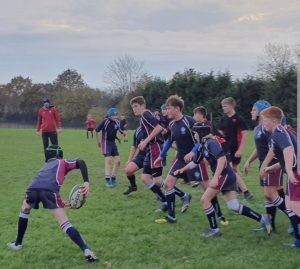 Scrum half Iwan Pearce-Morgan whips a pass away.

The hosts now enjoyed their best spell of the match and with fly half Jack Gedrych prompting his team well, Gowerton’s line was besieged. No.8 Lloyd and flanker Rees (twice) were held up over the line and it seemed inevitable that the hosts would score. However, Gowerton were able to lay the siege when hooker Ethan Wood took a 5 metre scrum against the head, the ball was moved to centre Tyler Davies who set off on a lung-busting run that took him the length of the field and ended when he dotted down beneath the posts. Scrum half Pearce-Morgan converted.
This set back hit the hosts’ confidence and when their kick off failed to travel 10 metres, Gowerton attacked from the resulting scrum and again centre Davies showed his potential with an arcing run that took him outside his man and once he’d breached the cover he had the pace to sprint to the corner to complete his hat-trick.
With 10 minutes to go Gowerton appeared to be in control but Pontarddulais ended the game as they had begun. First No.8 Lloyd powered over before in the final moments prop Conor Osmond scored. The final whistle followed and Gowerton had achieved a hard fought 31-24 win.