Gwyr year 8 hosted next door neighbours Gowerton in the semi-final of the Ospreys West cup. The two schools produced an excellent and entertaining game of rugby with both sides keeping the ball in hand at every opportunity.
The hosts held the advantage up front with No.8 Aaron Templeton, flanker Indiana Jones and prop John Mann all carrying strongly. The visitors carried the greater threat behind the scrum with the subtle footwork and confident handling of centres Ethan and Tyler Davies and wing Drew Dodd meaning they were a constant threat whenever they received quick ball.
Gowerton kicked off and applied the early pressure. In the 5th minute the first meaningful attack saw the excellent footwork of centre Ethan Davies beat two defenders in his own half and sprint into open field, he was only denied the opening score by an excellent tackle cover by flanker Ollie Lewis.
Gwyr turned over possession, scrum half Cai Gealy kicked behind Gowerton’s defence, centre Joseph Walters regained the ball and after strong carries by No.8 Templeton and flanker Jones play was switched allowing wing Mabon Thomas to cross in the corner.
The visitors responded immediately, they reclaimed the kick off and were in front after a strong carry by prop Harvey Marshall took play into 22 and centre Tyler Davies ran an excellent angle to slice through the defence and score a try converted by Iwan Pearce-Morgan. 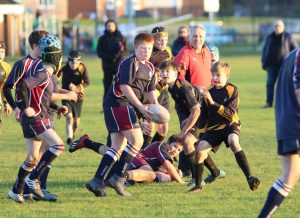 Gwyr were the dominant team in the next quarter and crossed twice before half time. Fly half Joseph Beard distributed intelligently while centres Walters and Jack Wilcox and full back Evan Jones all carried an attacking threat.
They retook the lead from a 5 metre scrum. Initially, Gowerton’s defence was impressive and thwarted powerful surges from No.8 Templeton, flankers Jones and Lewis and prop Mann with flankers James Wells and Jacob Garlick, hooker Ethan Wood and lock Isobel Baldwin-Pritchard all belying their size to make crucial tackles against their heavier opponents. Inevitably the pressure told and centre Wilcox crossed for a try that Mann converted.
The hosts increased their lead on the stroke of half time when a loose midfield clearance kick allowed Gwyr full back Jones to feed centre Joseph Walters whose great footwork took him around a defender for a score again converted by Mann. At the interval the hosts held a 19-7 advantage. 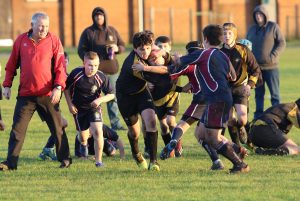 Jac Lewis-Colwill looks to get to grips with a Gwyr opponent..

Despite the deficit Gowerton were rejuvenated by the break. Gwyr increased their advantage when more good work from No.8 Templeton allowed prop Mann to barrel over for a try he converted.
The hosts’ forwards were now beginning to tire allowing Gowerton’s pack to give their backs quicker possession and with impressive scrum half Pearce-Morgan’s swift service giving them extra space they were able to exploit the space that appeared. A pacey run by wing and player of the match Dodd took him deep into the hosts 22, he was tackled short and the ball was moved swiftly to the opposite wing where Daniel Chung was just unable to ground the ball. However, the hosts were penalised, scrum half Pearce-Morgan tapped it quickly and fed prop Marshall who powered over from short range Pearce-Morgan added the extras. 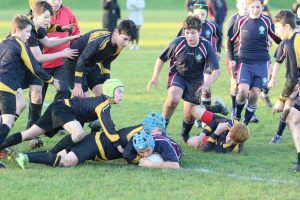 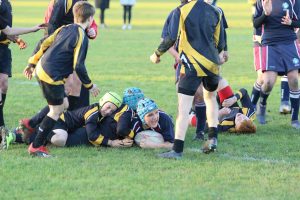 The joy of scoring for Harvey Marshall.

Gowerton were now prepared to run from deep and following a scrum on their own line the ball was moved to centre Tyler Davies, his outside break took him around his opposite number, he brushed aside the last man and ran the length of field to dot down for a try converted by co-centre Ethan Davies.
With two minutes to go and Gowerton trailing by three points they again looked to run from behind their own line, however, they spilled the ball and Gwyr scrum half Cai Gealy dived on the loose ball to claim the score, prop Mann converted.
Gowerton were not going to be denied and deservedly had the final say. Gwyr were penalised when they failed to release at the break down. No.8 Jac Lewis-Colwill took the ball up, quick ruck ball released the backs and centre Tyler Davies outpaced the cover to complete his hat-trick. Ethan Davies added the extras. 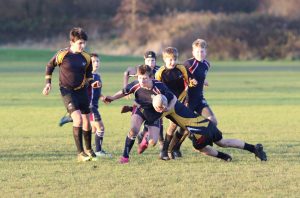 The final whistle followed and Gwyr deservedly qualified to play Ystalyfera in the final at Dunvant RFC. Gowerton will play Olchfa in the third place play-off.